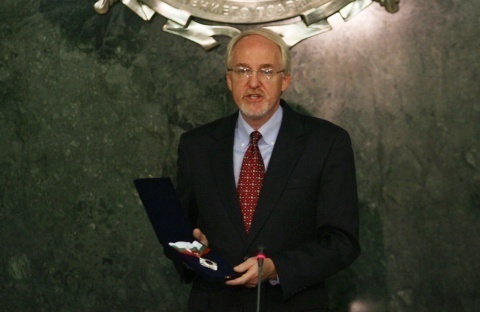 The following cable, sent by John Beyrle, US Ambassador to Bulgaria before going to Moscow, dated January 25, 2007, has been released by WikiLeaks and their Bulgarian partner, the site for investigative journalism Bivol.bg.

1. (C) SUMMARY: Bulgaria made a surprise, but largely positive change at the top of a key security service on January 11, replacing the country's counterintelligence chief, National Security Service (NSS) chief Ivan Chobanov, with long time NSS Deputy Head Ivan Drashkov. As attention centered on the NSS shakeup, troubles continued at the National Intelligence Service (NIS, the external service), with MPs appointing an ad-hoc commission to gather information about the recent apparent suicides of two NIS officials. While local speculation saw the reshuffle aimed at deflecting attention from problems at the NIS or as a play by Interior Minister Rumen Petkov to strengthen his control over key MOI services, we believe the NSS move is more likely linked to larger plans to restructure the Bulgarian intelligence community --as well as simple dissatisfaction with Chobanov's performance. In particular, we see the appointment of pro-Western career intelligence officer Ivan Drashkov to replace Chobanov as a significant step in the right direction. END SUMMARY.

THE NSS CHIEF: DISMISSED WITH PRAISE

2. (C) On January 11, the government press office announced the cabinet's decision (approved by President Parvanov) to dismiss National Security Service (NSS) Chief Ivan Chobanov and appoint one of the NSS's two deputy directors, Ivan Drashkov, to replace him. The Interior Ministry said Chobanov, who has headed the NSS since February 2002, "has stated his desire to leave the post of NSS chief and take up another post, thereby terminating his career at the Interior Ministry." As head of the country's domestic security and counterintelligence service, Chobanov is widely believed to have access to "dirt" on Bulgaria's political leadership; by announcing its intention to name him Bulgaria's envoy to Zimbabwe, the government has allowed him to save a bare minimum of face while, ensuring that he keeps a comfortable distance from the country's political life. (A similar strategy of de facto exile was followed with another "man who knew too much" -- former Chief Prosecutor Nikolai Filchev, now Bulgarian Ambassador to Kazakhstan.)

3. (SBU) While local media dug for facts and pondered Chobanov's sudden desire to pursue a diplomatic career in Africa, Interior Minister Petkov heaped praise on the ex-NSS chief. In a series of interviews following Chobanov's dismissal, Petkov said he was "exceedingly satisfied" with Chobanov's professionalism and excellent work, and especially noted his contribution in reforming the NSS. In addition, Chobanov was decorated with the Interior Ministry's Medal of Honor in recognition of his successful work. Local press ironically juxtaposed Petkov's effusive praise with the frequency with which Bulgarian security chiefs are "fired for excellent service."

IN THE GENDARMERIE: MUCH ADO ABOUT NOTHING

4. (SBU) The suspension of the head of the MoI's Gendarmerie service --also made public January 11-- provoked a brief surge of additional political and media scrutiny. The Interior Ministry announced that Gendarmerie chief Zhivko Zhivkov was suspended from office on suspicion of abuse of authority, and that materials gathered during an internal inspection had been handed to the District Military Prosecutor's Office. Zhivkov denied wrongdoing and told local media he had volunteered to temporarily leave his post while the investigation was ongoing. The ministry gave no further details but local media reported the issue was linked to alleged nepotism. Two days later, Zhivkov was reinstated as the military prosecutors declined to initiate pretrial proceedings due to a lack of evidence.

TROUBLES AT THE INTELLIGENCE SERVICE

5. (C) The National Intelligence Service was not immune from difficulties of its own. (Note: The NIS handles foreign intelligence and reports directly to the President, while the NSS focuses on domestic counterintelligence and internal security and reports to the Minister of Interior.) The NIS's latest round of troubles date to late 2006, and center on the mysterious presumed suicide of the official in charge of the service's intelligence archives. Bozhidar Doychev, who served as director of the NIS archives since 1991, was foun in his office with a bullet in his head on 15 November 2006, just as parliament was preparing a law on the opening of communist-era secret files (Ref. A). Another NIS employee, Ivan Rakov, was found shot dead on 14 December 2006. On January 17, the parliamentary Domestic Security and Public Order Committee summoned NIS chief Gen. Kircho Kirov to testify on the two cases. At the closed-door hearing, Kirov reportedly reiterated that the two deaths were suicides resulting from the victims' personal problems and were not related to their work at the NIS. Given the relative rarity of suicides, and the close timing, MPs were apparently unconvinced and set up a three member ad-hoc committee to collect information and produce a detailed analysis.

6. (C) The simultaneous dismissals at the MOI and the ongoing investigation of the two NIS deaths have reinvigorated the public and political debate about the reorganization and regulation of the country's intelligence services. Currently, the intelligence service (NIS) and the National Protection Service are under the President while the counter-intelligence and security service (NSS) and the anti-mafia body, the Chief Directorate for Combating Organized Crime, are structures within the Interior Ministry. Following Chobanov's dismissal, Nikolai Svinarov, former Defense Minister and Chairman of parliament's Domestic Security Committee, said the Interior Minister should have coordinated the changes at the MOI with Parliament, and proposed restructuring the services to bring the NIS under the supervision of the government.

7. (SBU) President Parvanov, who began his second five-year term on January 22, used his inauguration speech to urge MPs to adopt a new legal framework for the work of the secret services, aimed at strengthening civilian control and ensuring greater transparency. Parvanov also made clear that he opposed consolidation of the intelligence services under one authority, which would remove his control over the NIS. "The main thing is not to have over-centralized services with new levels of management, but to achieve effective coordination among them." Parvanov floated again his idea for the creation of an independent service to combat high-level corruption. Thus far only Chief Prosecutor Boris Velchev, a former legal advisor of Parvanov, has backed the president, while most government figures have remained silent. THE NEW NSS CHIEF: A TRUE PROFESSIONAL

8. (C) The new NSS chief, Ivan Drashkov, is a career intelligence officer with 21 years of service. He is respected by politicians of all stripes, which has allowed him to retain the key post of deputy NSS head during three subsequent post-communist governments. He began his career in the then-State Security Agency's Second Chief Directorate (responsible for counterintelligence) in 1986, three years before the collapse of communism. rising through the ranks until 1999, when the rightist government of Ivan Kostov promoted him to serve as one of the service's two deputy chiefs. After the dismissal of then-NSS chief (and current MP) Atanas Atanasov, Drashkov served as acting NSS chief from November 2001 - February 2002.

9. (S/NF) In the experience of agencies at post, Drashkov is a true professional who hopes to use his mandate to stamp out corruption, reallocate resources to counter emerging threats such as terrorism, and boost morale and service discipline. Unlike his old boss Chobanov, who was widely viewed as incompetent and close to Russia, Drashkov has a pro-Western, anti-Russian outlook. While he owes his appointment to Minister Petkov, Drashkov also begins his term with the support of President Parvanov, PM Stanishev, and leaders of other political parties. He has a reputation for being his own man; we expect he will resist pressure to politicize the NSS.

10. (S/NF) Despite the public clamor over the recent reshuffle at MoI, we believe the larger story here is the looming fight over the future of the NIS. While the government cleans house at NSS, the president is increasingly hard-pressed to justify his continuing control over the NIS, where Gen. Kirov's miserable leadership record has led many to call for his dismissal. Kirov's fate may, in turn, determine the fate of his service. President Parvanov -- who SOFIA 00000115 003 OF 003 admitted during last year's election campaign to the existence of an intelligence dossier on his contacts with the communist State Security (Ref. B) -- may be loath to dismiss the man who controls the country's intelligence archives. But by keeping the sycophantic Kirov in charge, Parvanov feeds the voices in Parliament who would like to strip the NIS from his control.

*The original WikiLeaks cable can be viewed HERE.