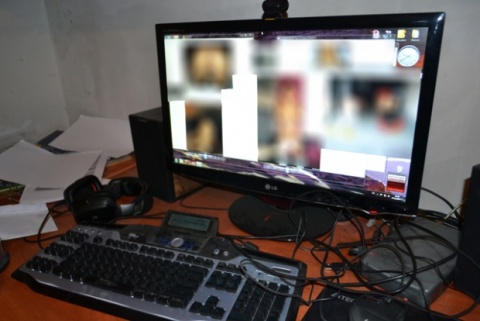 20 men were busted for child pornography in Bulgara. Photo by Interior Ministry

GDBOP's special operation was carried out Tuesday night together with anti-mafia squads from the IT crimes and gambling unit of the Bulgarian police, the Interior Ministry press service announced on Wednesday.

The 20 men were arrested all over the country – in Blagoevgrad, Burgas, Varna, Veliko Tarnovo, Gorna Oryahovitsa, Plovdiv, Pleven, Sliven, Svishtov, and the wider Sofia region.

The police also seized a large amount of computer and video equipment. Initial reports of the police say the cops captured dozens of terrabites of pornographic videos featuring "extremely repulsing sexual profanities" with children aged between 2 and 11.

The police has also found footage shot on Skype in which young children "were forced to satisfy the sexually perverse desires of adult men," in the language of the police.

The detainees are aged between 20 and 40; each of them has been arrested for 24 hours.

One of the detainees is Yulian Velchev, an associate professor at the Radiotechnology Department of the Sofia Technical University.

The police have been investigating and following the pedophilia suspects since early September.