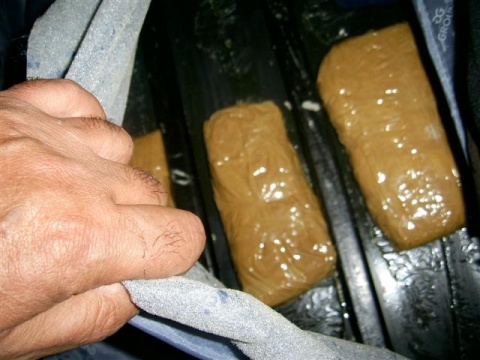 Pictured: 24 packages with heroin were captured at the Bulgarian-Turkish border inside car doors. Photo by Customs Agency

Bulgarian customs agents have captured a 12.5 kg shipment of heroin at the Kapitan Andreevo crossing on the Bulgarian-Turkish border.

The drugs were discovered in secret compartments inside the doors of a car with Bulgarian license plates entering Bulgaria from Turkey.

According to the Bulgarian police, the heroin shipment is worth over BGN 1.5 M in "retail" prices.

The driver of the car and the only passengers have been arrested. The two men, aged 49 and 31 are a father and a son, and, according to the Customs Agency, are "Bulgarian citizens of Roma origin."

The hit of the customs officers was followed up by a special operation of the Bulgarian Unit for Combating Organized Crime GDBOP, which arrested one more Bulgarian citizen and a Turkish citizen who are suspected of being involved in the drug trafficking channel.