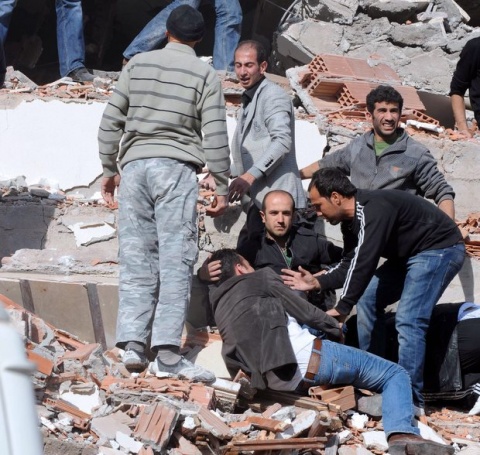 Turkish people help each other on a collapsed building after an earthquake in Van, east of Turkey on 23 October 2011. EPA/BGNES

Between 500 and 1,000 are estimated to have been killed by the earthquake that shook the eastern Turkish province of Van Sunday.

The US Geological Survey determined the exact magnitude of the initial tremor to be 7.3 on the Richter scale, after initially announcing 7.6 degrees, against the 6.6 degrees estimated by the Turkish service.

Turkish vice-PM Besir Atalay stated that around 10 buildings have collapsed in the city of Van, and 30 more in the region.

The initial quake was followed by a strong, 5.6 degree aftershock, which left people in panic.

The first tremor occurred at 10.41 GMT, 94.5 km deep, with an epicenter near the village of Tabanli near the Iran border.