Gaddafi Stashed Away USD 200 B before He Was Killed - Report 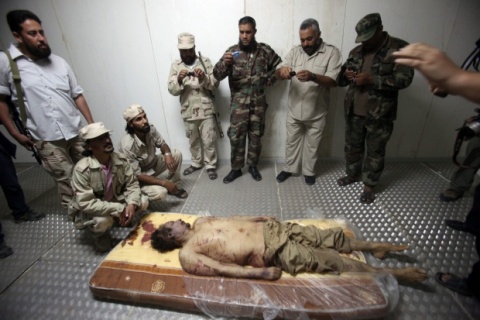 The body of dead former Libyan Leader Muammar Gaddafi is seen inside a storage freezer in Misrata, Libya, 21 October 2011. EPA/BGNES

Libya's slain dictator Muammar Gaddafi succeeded in stashing away approximately USD 200 billion around the world before he was killed on Thursday, senior Libyan officials say.

The staggering amount of money is said to be allocated in bank accounts, real estate and corporate investments, according to Los Angeles Times.

Last spring, Obama administration officials stumbled upon USD 37 B in Libyan regime accounts and investments in the United States. As a result, the assets were quickly frozen so that neither Gaddafi nor his aides could move them.

France, Italy, England and Germany froze approximately USD 30 B. It is believed that the late dictator stashed a further USD 30 B elsewhere in the world, which makes a total of nearly USD 100 B.

However, recent investigations carried out by US, European and Libyan authorities have revealed that Gaddafi also secretly sent tens of billions more abroad over the years and made lucrative investments in nearly every major country, including much of the Middle East and Southeast Asia, the US paper points out.

Besides that, the former strongmen is believed to have amassed billions of dollars in gold reserves inside Libya itself.