Gaddafi Got Tortured, Then Shot by Libyan Rebels - Report 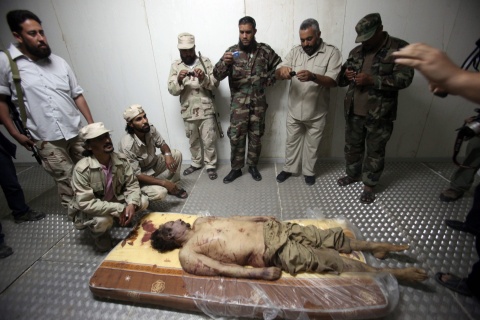 The body of dead former Libyan Leader Muammar Gaddafi is seen inside a storage freezer in Misrata, Libya, 21 October 2011. EPA/BGNES

Former Libyan dictator Muammar Gaddafi was severely beaten and then shot dead by the rebels who caught him, according to unconfirmed reports.

The fugitive dictator was captured in his last bastion and home town Sirte on Thursday, after a convoy with which he tried to escape was attacked by NATO aircraft.

Gaddafi's vehicle was hit, and he tried to hide in a drainage pipe where he was captured by rebels. Video footage that was subsequently released showed that he was still alive after he was arrested but that he was covered in blood, and with gunshot wounds.

Reports about Gaddafi's death remain contradictory, with claims that he was shot and wounded while trying to escape.

His body was taken to Misrata where it was on display Friday in a commercial freezer.

In Misrata, residents crowded into long lines to get a chance to view the body of Gaddafi, which was laid out on a mattress on the floor of an emptied-out vegetable and onions freezer at a local shopping centre. The body had apparently been stowed in the freezer in an attempt to keep it out of the public eye, but once the location was known, that intention was swept away in the overwhelming desire of residents to see the man they so deeply despised.

Men, women and children filed in to take their picture with the body. The site's guards had even organised separate visiting hours for families and single men.

'We want to see the dog,' some chanted.

The body of Gaddafi, 69, was stripped to the waist, his torso and arms streaked with dried blood. Bullet wounds in the chest, abdomen and left side of the head were visible.

The bloody siege of Misrata over the summer instilled a particularly virulent hatred of Gaddafi there - a hatred now mixed with pride because he was captured and killed by fighters from the city.

An anonymous representative of Libya's Transitional National Council was quoted by international media Friday night as stating that Gaddafi was beaten, and then shot by the rebels who found him.

Meanwhile, Gaddafi's widow Safia Farkash has requested that her husband's dead body be given to her in an address broadcast by the Syrian-based Iraqi TV channel Ar Ray, which is close to the Gaddafi family.

The address describes the dictator as a "martyr" who fell prey to the "aggression" of 40 nations.

The United Nations' office for human rights has called for an official investigation into Gaddafi's subsequent death.