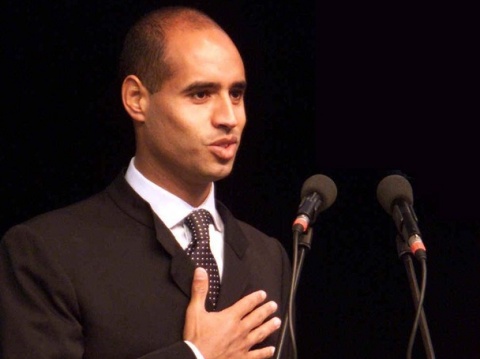 Seif al-Islam Gaddafi, a key son of Libya's toppled dictator Muammar Gaddafi is wanted by the International Criminal Court for crimes against humanity. Photo by EPA/BGNES

Seif al-Islam Gaddafi, a key son of Libya's toppled dictator Muammar Gaddafi, has been arrested by the rebel forces in the town of Zliten, some 300 km from Sirte, where his father was killed Thursday.

The news was announced Friday by the Al Arabia TV, citing one of the rebel fighters, saying al Islam had been hit in the back by several gunshots, and that pictures would be released shortly.

The latest news comes amidst conflicting reports about Gaddafi's son's whereabouts – that he was caught and killed Thursday night and that he was fleeing to Niger, shortly after Sirte was overwhelmed by the rebel forces, and Muammar Gaddafi was captured and died of his wounds.

Saif al-Islam was last known to have been in the area of Bani Walid and was believed to be "in the desert" around the town, Abdelmajid Saif al-Nasr, a Transitional National Council, TNC, official, told the Qatar-based TV channel one day ago.

Saif al-Islam is wanted by the International Criminal Court for crimes against humanity. He had been his father's likely choice to succeed him as Libya's leader.

Meanwhile, NTC, cited by the Russian RIA-Novosti, announced they will conduct DNA testing to prove the body, currently kept in a freezer in a shopping center in the town of Misrata, is really Gaddafi's.