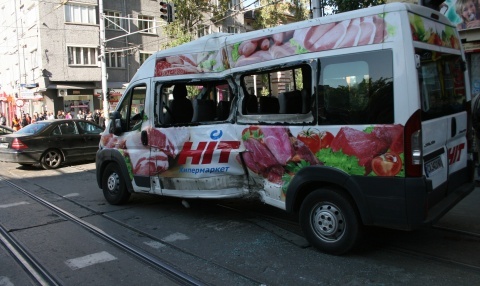 The collision with a Sofia tram caused a taxi shuttle to go into several 360-degree spins, hitting a number of pedestrians and striking a vehicle traveling right behind it. Photo by BGNES

The condition of two women, who sustained the most serious injuries in the hellish Thursday crash in downtown Sofia, has been upgraded from critical to stable.

The information was reported Friday by the press center of the Sofia emergency Pirogov hospital. The two underwent a series of complex and life-saving surgeries.

The pedestrian, 34, who was pinned between a car and a taxi shuttle, while crossing the street at a green light, has been listed in shock, with a huge wound on the left hip and significant blood loss. She underwent surgeries all through the night and remains on life support, but her condition is relatively stable, according to Pirogov doctors.

The 23-year-old girl, who was a passenger in the shuttle, has been listed with scull trauma and also underwent surgery. She is stable and able to communicate.

A collision between a tram and a taxi shuttle at the crossing of Patriarch Evtimiy Boulevard and Vassil Levski Boulevard in the very heart of Sofia left 16 people injured Thursday afternoon.

The chain reaction crash was triggered by Tram #10, which crossed a red light, ran into the shuttle and stopped only after colliding with Tram #12.

The cause of the incident remains unclear with representatives of the Transport Department of the Sofia City Hall dismissing earlier reports of possible brake failure causing Tram #10 to cross a red light at an estimated 60 km/h, running into taxi shuttle #35. They say that the first inspection had shown that all three break systems of the tram were in perfect condition. The female driver has 30 years of experience on the job and tests show she had not been using alcohol prior to the crash.

The collision caused the taxi shuttle with about 10 passengers to go into several 360-degree spins, hitting a number of pedestrians, among which the 34-year-old woman who got literally run over, and striking a vehicle traveling right behind it.

Tram # 10 eventually rear-ended Tram 12 which had stopped in front of it.

According to an announcement of the Bulgarian Health Ministry, 3 children were hurt in the crash, but did not sustain any serious injuries.