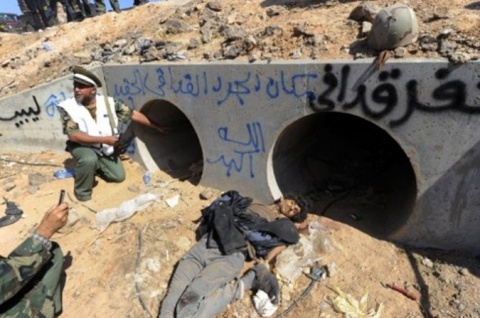 A Libyan National Transitional Council (NTC) fighter looks through a large concrete pipe where ousted Libyan leader Muammar Gaddafi was allegedly captured and killed, with a dead loyalist gunmen in the foreground, in the coastal Libyan city of Sirte on Oc

After two months in hiding, the fugitive Libyan dictator died of his wounds after he was captured and wounded as the Libyan rebel forces overran his last remaining bastion Sirte on Thursday afternoon.

The rebels essentially completed the Libyan Civil War which has been raging since February 2011, with NATO aircraft providing air cover for the rebels.

On Thursday morning, NATO aircraft bombarded two pro-Gaddafi military vehicles in the vicinity of his hometown of Sirte.

The Pentagon, however, has said it is not clear if Col Gaddafi was part of a convoy bombed by Nato aircraft on Thursday morning.

"We know there was an air strike on a small convoy of vehicles that were deemed to be and in the act of threatening Libyan civilians" outside of Sirte, spokesman Capt John Kirby told reporters, as cited by The BBC. "But there's no indication or identification of the people that were in that convoy," Kirby said.

There have been reports that after the air strike on the escape convoy, later on Thursday, Gaddafi was hiding in a hole in Sirte, from where he was captured by rebel troops still alive.