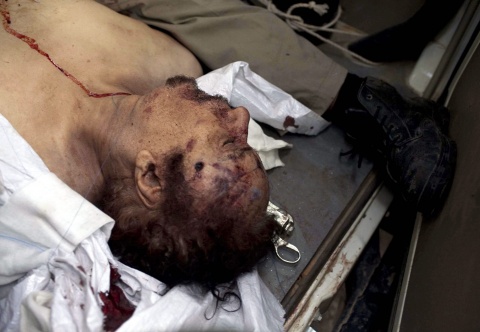 The body of killed former Libyan Leader Muammar Gaddafi is brought by ambulance to the hospital in Misrata, Libya, 20 October 2011. EPA/BGNESBGNES

Former Libyan dictator Muammar Gaddafi was alive at the time of his capture, even though he was wounded, video footage released by Al Jazeera shows.

The 21-second video clip shows bleeding Gaddafi surrounded by a group of rebels after the capture of Sirte, his last bastion, Thursday afternoon. The video can be viewed on YouTube HERE

He is pushed around in the hands of rebel fighters minutes before he died, allegedly of his wounds. Gaddafi's death was proven by another video released by Al Jazeera, which showed his shirtless body on the ground in a street in Sirte.

The death of the former dictator who has been in hiding for the past two months has been formally confirmed by Libya's Transitional National Council.

Al-Jazeera is reporting that Col Gaddafi's body has been placed in a mosque in Misrata after it was brought there in an ambulance.

Mohammed, a resident of Misrata, claims he has been to the mosque in his city to which Col Gaddafi's body has been taken, as cited by the BBC. Speaking to a producer for BBC World Have Your Say, he says: "It's definitely him, it's his hair, his face, I would know it anywhere - all Libyan would."