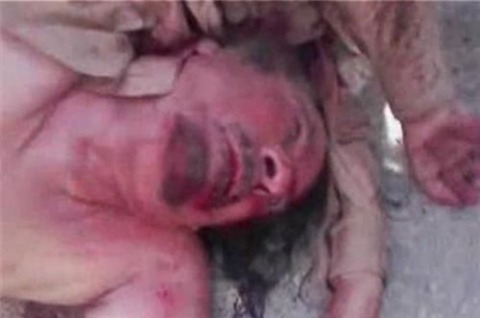 A photo released by Al Jazeera has been announced as a proof of the death of former Libyan dictator Muammar Gaddafi. Photo by Al Jazeera

A photo released by Al Jazeera has been announced as a proof of the death of former Libyan dictator Muammar Gaddafi who was wounded as he was captured by rebel troops Thursday.

Al Jazeera has acquired exclusive footage of the body of Muammar Gaddafi after he was killed in his hometown, Sirte.

The graphic footage showing Gaddafi's shirtless blood-covered body in the street can be viewed on YouTube HERE.

Abdul Hakim Belhaj, a military chief of the Libyan rebels, said Gaddafi had died of his wounds after being captured near Sirte on Thursday.

The body of the former Libyan leader was taken to a location which is being kept secret for security reasons, an NTC official said, as cited by Al Jazeera.

"Gaddafi's body is with our unit in a car and we are taking the body to a secret place for security reasons," Mohamed Abdel Kafi, an NTC official in the city of Misrata, told Reuters.

Earlier, Abdel Majid, another NTC official, said the toppled leader had been wounded in both legs.

Earlier a photo appeared to show Gaddafi heavily bloodied, but it was not possible to confirm the authenticity of the picture.

The news came shortly after the NTC captured Sirte, Gaddafi's hometown, after weeks of fighting.