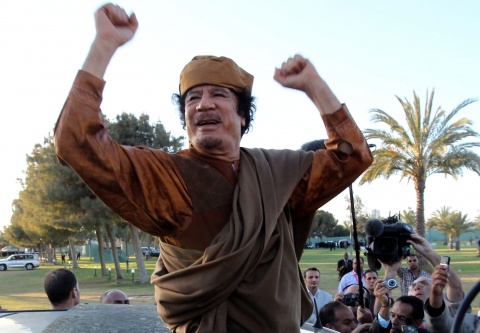 Fugitive Libyan dictator Muammar Gaddafi has been captured by the rebel forces of the so called Transitional National Council.

After almost 42 years in power, notorious Libyan dictator Muammar Gaddafi, has been toppled by the popular uprising in the country.

"He's captured. He's wounded in both legs ... He's been taken away by ambulance," Abdel Majid, a rebel commander, announced, as cited by international media.

After almost two months in hiding, Gaddafi was arrested Thursday afternoon, after the rebel forces overwhelmed his last stronghold and hometown Sirte.

The demise of Gaddafi's regime came after a nine-month civil war struggle. Libya's long-serving dictator Muammar Gaddafi was toppled by a popular uprising on August 22, 2011

Gaddafi's dictatorship has been power in Libya since September 1, 1969, after Gaddafi removed Libyan King Idris in a bloodless coup.

Gaddafi has technically ruled Libya under a political philosophy of his own termed the Third International Theory, which rejects both capitalism and communism (in the Cold War Days), and was based on ideals of Arab nationalism and socialism, combined with aspects of Islam.

He laid out his political philosophy in the 1970s in his Green Book. In 1977, he invented a system called the "Jamahiriya" or "state of the masses", in which power is meant to be held by thousands of "peoples' committees".

The United Nations called Libya under Gaddafi a pariah state, and the United States held Libya on its list of states sponsoring terrorism from 1979 to 2006.

In 1986, Gaddafi's compound and much of Libya was bombed by the United States in retaliation for the 1986 Berlin disco bombing. He was described as a “mad dog” by US President Ronald Reagan.

The 1988 bombing of the Pan Am flight over Lockerbie in Scotland is possibly the most well known international incident in which Gaddafi has been involved.

For many years, Gaddafi denied involvement, resulting in UN sanctions and Libya’s status as a pariah state. Abdel Basset al-Megrahi, a Libyan intelligence agent, was convicted in 2001 for planting the bomb, and was released by the UK in 2009.

In early February 2011, Gaddafi's government faced major political protests following in the wake of demonstrations in Tunisia, Egypt, and other parts of the Arab world. The protests quickly turned into a civil war. Gaddafi vowed to "die a martyr" if necessary in his fight against rebels and external forces, saying that those rebelling against his government deserved to die.

On March 19, 2011, NATO-led international forces started air and rocket strikes against the Gaddafi regime under a UN Security Council mandate.

On 27 June 2011 the International Criminal Court issued an arrest warrant against Gaddafi for crimes against humanity.

On 20 August, the rebellion against his rule reached Tripoli, with a large uprising taking place. The Battle for Tripoli spanned several days ended with the unconditional capture of the Libyan capital.

Gaddafi's last remaining strongholds – Bani Walid, Sabha, and Sirte – were overwhelmed by the rebels in September-October 2011.