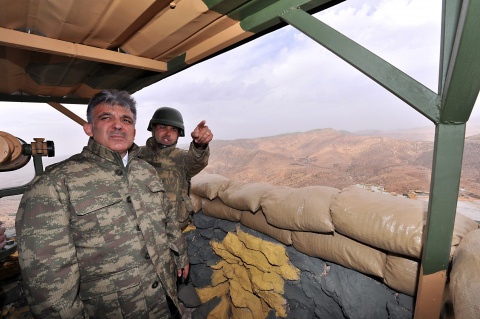 Bulgarian Foreign Minister Nikolay Mladenov has addressed his "sincere condolences" to the families of the Turkish soldiers killed in Wednesday's attacks on military posts along the border with Iraq, the Foreign Ministry announced.

A total of 24 Turkish soldiers were killed Wednesday morning along the Iraqi border in attacks by Kurdish militants from PKK, the Kurdistan Workers Party.

"I want to express strong indignation at this bloody act, and once again to confirm that Bulgaria strongly condemns any kind of terror," Bulgarian Foreign Minister Mladenov said in the cable to his Turkish counterpart Ahmet Davutoglu, emphasizing that the problems may be solved only through dialogue.

Turkey launched air and ground assaults on Kurdish militants in Iraq on Wednesday, vowing to take "great revenge" after 24 Turkish soldiers were killed in one of the deadliest Kurdish attacks in decades, international media reported.

Security officials said about 100 fighters from the PKK, or Kurdistan Workers Party, mounted simultaneous attacks on seven remote army outposts in Cukurca and Yuksekova districts of Hakkari province, on the rugged southeastern border with Iraq.

The PKK, which has bases in Iraqi Kurdistan, did not immediately claim responsibility. But the fighting, in which Turkey said it killed 15 Kurdish militants after the initial assault.

Turkish security sources said commandos pushed up to 8 km into Iraq in pursuit of Kurdish fighters and warplanes struck targets around a guerrilla camp on the Zap river in the autonomous Iraqi region of Kurdistan.

Twenty-four soldiers were killed and 18 wounded in the attacks, Prime Minister Tayyip Erdogan said at a televised news conference in which he said wide-ranging operations, including hot pursuit missions, had been launched.

Erdogan canceled a foreign trip had been about to start and convened an emergency meeting with the interior and defense ministers, along with intelligence chiefs and top generals. The foreign minister also canceled a planned visit abroad.

Ethnic Kurds live in an area that sprawls across the borders of Iran, Iraq, Turkey and Syria.

Turkey, which has frequently accused Iraq of not doing enough to crack down on PKK bases, has launched air and ground operations across the border several times in the past.

The last major land incursion was in 2008, when it sent in 10,000 troops backed by air power. But speculation had been rife that a new cross-border offensive was on the cards.

Kurdish rebels seeking an independent Kurdish homeland took up arms against the Turkish state in 1984 and more than 40,000 people have died in the conflict.

Considered a terrorist group by Turkey, the United States and the European Union, the PKK has since modified its demands to greater autonomy and more rights for Kurds, who are believed to make up 15 million of Turkey's 74 million people.