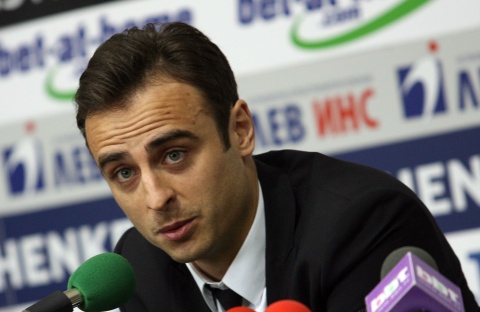 "I can't play for the national team if I'm not playing for my club,'' Dimitar Berbatov has said. Photo by Sofia Photo Agency

Manchester United striker Dimitar Berbatov, who announced last year his withdrawal as captain of the national team, has made it clear he will not be heading back to Bulgaria despite the fans' beggings and pleas.

Several hundred Bulgaria fans travelled to Romania to show Berbatov their support for him and beg him to come back to his homeland. Much to their disappointment, Berbatov not only did not play – he was unused substitute in United's 2-0 Champions League win over Otelul Galati at the National Arena in Bucharest, but also snubbed their calls.

"I didn't expect such reaction," said Berbatov. "I would like to thank the fans, it was very pleasant. My team-mates wondered what was happening and I had to explain them (about the noise from the stands).''

"I can't play for the national team if I'm not playing for my club,'' he added. "I want to get more chances because I know I can help the team. I'll continue to give my best to earn my place in the team."

Dimitar Berbatov announced at the beginning of May last year his retirement from international football with immediate effect. He was captain of his country and scored a national record 48 goals in just 74 matches.

He has repeatedly said that the decision about leaving Bulgaria's national football team was not taken lightly, but it is final.

British media have commented that Berbatov may be considering a dramatic career U-turn after his international retirement failed to boost his club career as expected.

Dimitar Berbatov admitted last month that he is not part of the national team because of "some people in the Bulgarian Football Union".

"He only knows how to criticize but he can't see what he looks like," Berbatov said, referring to Yordan Lechkov, best known as a key member of the Bulgarian football squad that finished fourth at the 1994 World Cup in the United States.

Lechkov, who is currently serving as mayor of the town of Sliven, did not hesitate to strike back, insulting Berbatov. According to him the Manchester United striker "is the best football player among artists and the best artist among football players".