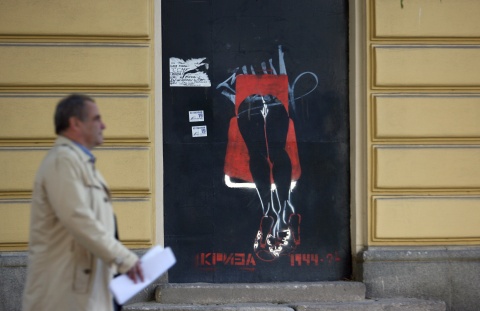 A man walks past graffiti, depicting the crisis as a lady in Bulgaria’s capital Sofia. Photo by Sofia Photo Agency

Bulgaria's economic growth until 2014 will be below the government's estimates due to the slow-down in the euro area and the weakened demand for exports from the country, the Washington D.C.-based Institute of International Finance said.

"Assuming the sovereign-debt crisis in the Eurozone is resolved in an orderly manner, real GDP should increase roughly 2 percent both this year and next," according to the report. "A poor global growth outlook and increased risk aversion have greatly increased uncertainty. Even so, Bulgaria appears more resilient than many in the region."

"While the heavily export-dependent economy would undoubtedly be strongly affected by sustained output weakness in Europe, it appears much less vulnerable to shifts in market sentiment given its small government deficit and debt, current- account surpluses and the absence of large refinancing needs until 2013, when a billion Eurobond falls due," the IIF said.

Earlier this month Bulgaria's government sharply revised downwards its economic growth forecast for next year from 4,2% to 2,5%, citing the slow-down in Western Europe.

"My preliminary estimates for next year's growth are around 2.5%," Finance Minister Simeon Djankov said, adding that obviously the previous forecast for 4.2% was unrealistic given "the current events abroad".

Germany, Bulgaria's biggest trading partner, is recording a slow-down in its economic growth for the second quarter and has cut its forecast for the next one, the minister specified.

The Finance Ministry is expected to submit the budget draft for next year to the government next week. After the cabinet gives it the green light, it will be tabled for debates in parliament.

All forecasts for the Bulgarian economy in 2011 are below the 3.6% growth projected by the Bulgarian government in its 2011 budget.