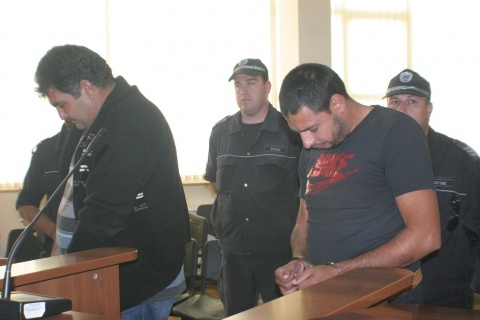 Pictured: the two Roma men - Georgi Yordanov and Spas Hristov - who ran over several people, including two policemen, in the village of Katunitsa shortly after 19-year-old was run over and killed by another associate of Roma boss Kiril Rashkov, aka Tsar K

Over 100 residents of the Bulgarian village of Katunitsa – the place of an incident that threatened to ignite ethnic violence across the country in mid September – staged a road blockade to demonstrate that their issues have already been forgotten by the authorities.

The protesters blockaded the road to the town of Sadovo, the center of Sadovo Municipality, near Plovdiv in Southern Bulgaria for one hour Monday night.

The new protest rally came after on Sunday, demonstrators from Katunitsa blocked the main road to Plovdiv in sign of outrage.

In mid September 2011, 19-year-old Angel Petrov, an ethnic Bulgarian boy, was murdered in the village of Katunitsa by associates of notorious Roma clan boss Kiril Rashkov, aka "Tsar Kiro", the incident led to a week of nationalist protests in major Bulgarian cities on the situation of the Roma minority, including attempted pogroms on Roma quarters by far-right groups countered by the arming of Roma residents, with all-out violence prevented only by a mobilization of gendarmerie and riot police forces.

In addition to Angel, 16-year-old Pavel also became a casualty of the clashes. He passed out during the turmoil in Katunitsa and died in the hospital. Pavel had a heart transplant done several years ago.

"We are here because of the inaction of the institutions. We fear that Angel's murder will be covered up," the protesters declared Monday night, as cited by Darik Radio, adding they demand a speedy trial and just sentences for Rashkov's associates who ran over Angel Petrov and several other locals and two policemen.

Katunitsa's residents demands include speeding up procedures and pressing serious charges against notorious Roma boss Kiril Rashkov AKA Tsar Kiro and his family; keeping Rashkov and his grandson in jail.

They blame media for providing a cover up for the responsible institutions and the authorities for using media outlets to stir useless noise around the illegal weapons that have been discovered in one of Tsar Kiro's houses in the village. They vow to remain unwavering in their demands.

The protesters from Katunitsa claim that the notorious Roma clan boss and his associates have stacked much greater quantities of illegal weapons that have not been discovered by the police.

Kiril Rashkov and one of his grandsons are behind bars on charges of making death threats to Katunitsa residents, involving Angel Petrov, 19, who was run over and killed by a van driven by one of Rashkov's associates on September 23. Tsar Kiro was detained on September 28. He is also probed for large-scale tax evasion.