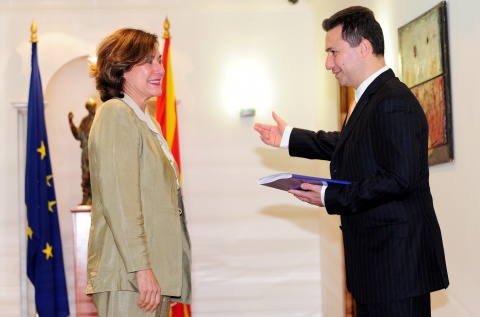 Macedonian Prime Minister Nikola Gruevski (R) gestures after he received the EU recommendation for Macedonia`s accession negotiations from Alexandra Cas Granje (L), director of the EU`s Directorate-General for Enlargement, at the Macedonia`s Government in

Certain representatives of the international community have employed a new pressure strategy against Macedonia on the name dispute, Gruevski told the Macedonian state news agency, as cited by BGNES.

In his interview, the Macedonian PM and leader of the ruling VMRO-DPMNE party stresses the fact that the European Commission gave a recommendation for the start of EU accession talks with Macedonia for a third consecutive year, a development that he described as "a great success for all citizens, institutions, and political parties" in Macedonia.

In its enlargement progress report on Macedonia last week, however, the EC made it clear that the unresolved name dispute with Greece remains a major obstacle for Skopje.

Thus, Macedonia continues to have no date for starting the EU talks as the Council of the European Union has repeatedly put off grating the country a date, largely because of its name dispute with Greece.

"[The international factors for pressure on Macedonia] believe that if I and the government accept some of the Greek suggestions on the dispute, this will lead to a solution, i.e. that our support will translate into a successful referendum on this issue," explained Macedonian PM Gruevski.

"This is a huge mistake, and this mistaken belief leads to their new pressure tactics against the government and myself which stresses that we aren't carrying out enough reforms, and emphasizes negative things to put us in a tough spot," he added, while also declaring that the new "pressure" against his government on the name dispute will actually produce "the reverse effect."

Gruevski made clear his expectations that the international pressure will end in a fiasco, while also expressing optimism that in 1-2 years the relations between Macedonia and Greece will be very far from their present situation.