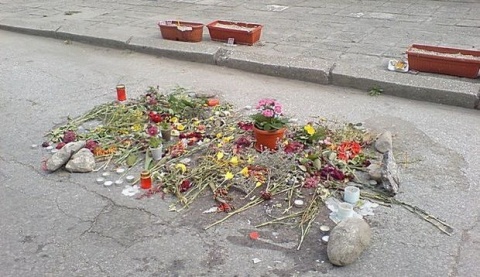 Hundreds gathered to remember the two youth, Angel and Pavel, who died in September after clashes in the Plovdiv village of Katunitsa. Photo by DarikNews Plovdiv

Residents of the village of Katunitsa near Bulgaria's second largest city of Plovdiv have staged a new protest rally Sunday.

The demonstrators have blocked the main road to Plovdiv in sign of outrage over the inactivity of the authorities and marched in memory of the two teenage boys who died at the end of September when clashes erupted in the village.

Katunitsa's residents demands include speeding up procedures and pressing serious charges against notorious Roma boss Kiril Rashkov AKA Tsar Kiro and his family; keeping Rashkov and his grandson in jail.

They blame media for providing a cover up for the responsible institutions and the authorities for using media outlets to stir useless noise around the illegal weapons that have been discovered in one of Tsar Kiro's houses in the village. They vow to remain unwavering in their demands.

Hundreds have gathered to remember Angel and Pavel. Another peaceful march is going to take place Monday.

Kiril Rashkov and one of his grandsons are behind bars on charges of making death threats to Katunitsa residents, involving Angel Petrov, 19, who was run over and killed by a van driven by one of Rashkov's associates on September 23. The incident triggered large-scale protests across the country, some of which turned to clashes between ethnic Bulgarians and Roma. Hundreds were arrested. Tsar Kiro was detained on September 28. He is also probed for large-scale tax evasion.

In addition to Angel, 16-year-old Pavel also became a casualty of the clashes. He passed out during the turmoil in Katunitsa and died in the hospital. Pavel had a heart transplant done several years ago.