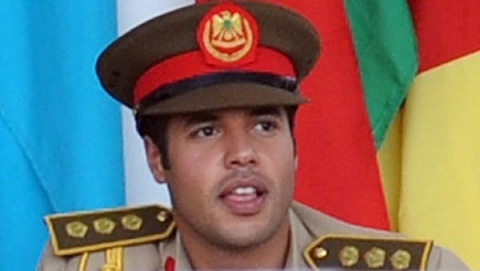 Khamis Gaddafi has been reported dead at least 4 times since March 2011. Photo by scrapetv.com

The demise of toppled Libyan dictator Muammar Gaddafi's son Khamis has been confirmed by a Syrian TV station.

Khamis had died in fighting in the city of Tarhouma, 90 km southeast of the capital Tripoli, on August 29, Arrai television officially announced on Monday. His cousin, Mohammed Abdullah al-Senousi, Col. Gaddafi's intelligence chief, was also confirmed as killed during the battle with Transitional National Council forces.

Khamis and Senousi died "while confronting the enemies of their homeland," according to the TV channel that has been broadcasting messages from the deposed leader and his spokesman since the fall of Tripoli.

Meanwhile, Al Jazeeera has reported that Libyan interim government forces have entered Bani Walid, one of the last outposts still loyal to Gaddafi. Transitional National Council fighters are now saying they control about 60 per cent of the town.

Fighting is reported to have eased in the city of Sirte, Gaddafi's birthplace and his final coastal stronghold.