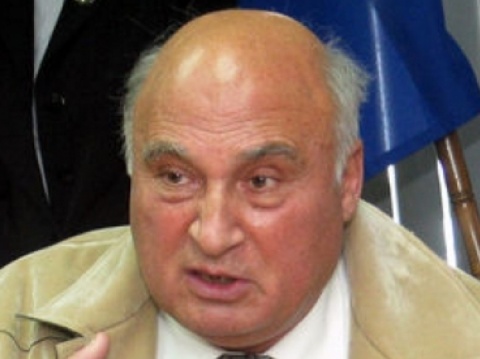 Bulgaria's notorious Roma boss Kiril Rashkov AKA Tsar Kiro is behind bars on charges of making death threats. He is probed for large-scale tax evasion. Photo by Maritsa newspaper

Police are raiding three houses in the village of Katunitsa near Bulgaria's second largest city of Plovdiv.

The raid is conducted under a court-issued search warrant. It is connected to the illegal weapons arsenal that was found over the weekend in a Katunitsa house, property of the deceased son of notorious Roma boss Kiril Rashkov AKA Tsar Kiro. The illegal arsenal included an automatic handgun with silencer, two chargers, a Browning and a Smith and Wesson, and a large amount of explosives and different caliber bullets.

According to the Chief of the Plovdiv police, Todor Chonov, the authorities went to the house after receiving information the weapons were located there. They were found in an attic. Chonov says everyone from the Rashkov clan will be interrogated.

The house is occupied by Rashkov's grandchildren. It is still unknown who the actual owner of the guns is, according to the police - they say they are working on the identification.

The owner of the illegal guns will face between 3 and 8 years behind bars – if it is proven that they belong to Tsar Kiro, he would be charged with ownership of illegal weapons in addition to other indictments.

Kiril Rashkov is behind bars on charges of making death threats to Katunitsa residents, involving Angel Petrov, 19, who was run over and killed by a van driven by one of Rashkov's associates on September 23. The incident triggered large-scale protests across the country, some of which turned to clashes between ethnic Bulgarians and Roma. Hundreds were arrested.

The Bulgarian Standart (Standard) daily cites residents of the village saying they believe Rashkov will once again escape justice.

The authorities are also testing the explosives over suspicions the same ones have been used in the bomb attack against the former Katunitsa Mayor, Sofia Hristova, allegedly carried out by members of Tsar Kiro's clan and aiming at intimidating the Mayor. Police say if a connection is found, the case will be reopened. The bomb exploded in front of a coffee shop, owned by Hristova. The probe did not find sound evidence about Rashkov's involvement and the case went cold.

Police further inform they are doing a very thorough check of the family's properties after finding the weapons and three empty, but locked safety vaults, which were left to mislead authorities that everything had been removed from the properties in Katunitsa.

Tsar Kiro was detained on September 28. He is also probed for large-scale tax evasions.