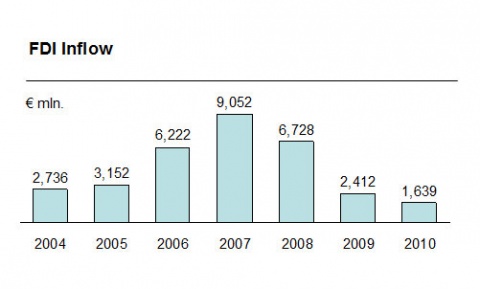 Bulgaria attracted a total of EUR 225.6 M of foreign direct investment in the first eight months of 2011, according to preliminary data of the Bulgarian National Bank.

The latest data nonetheless shows a positive trend, since in the first six months of 2011 Bulgaria's FDI balance was hardly positive.

BNB's data indicates that Bulgaria's attracted Equity Capital (acquisition/disposal of shares and equities in cash and contributions in kind by non-residents in/from the capital and reserves of Bulgarian enterprises and receipts/payments from/for real estate deals in the country) for January – August 2011 amounted to EUR 374.3 M. It decreased by EUR 444.6 M compared to that attracted in the same period of 2010 (EUR 818.9 M).

The receipts from real estate investments of non-residents amounted to EUR 178 M, compared to EUR 144.9 M attracted in January-August 2010.

Based on preliminary data on profit/loss, the reinvested rarnings (the share of non-residents in the undistributed earnings/ loss of the enterprise) in January-August 2011 were estimated at EUR 61.1 M, compared with EUR 71 M in the same period of 2010.

By country, the largest direct investments in Bulgaria for the period January – August 2011 were those of the Netherlands (EUR 172.9 M) and Russia (EUR 114.7 M). The largest negative flows for the period were towards Germany (EUR 146 M) and the United Kingdom (EUR 110.1 M), mainly due to net payments on intercompany credits in accordance with the loan repayment schedules of enterprises, the Bulgarian National Bank said.

In an interview for Novinite.com (Sofia News Agency) earlier this week, Borislav Stefanov, CEO of the InvestBulgaria Agency explained the limitations of the methodologies used in order to calculate Bulgaria's FDI, and provided a more thorough analysis, stressing that foreign investors' interest in Bulgaria is actually growing regardless of the statistics.