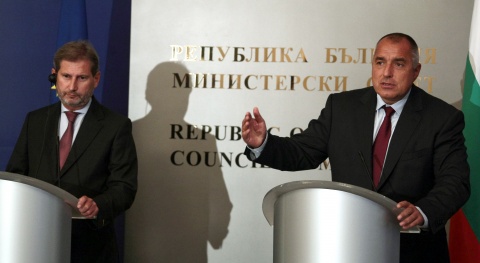 Bulgaria is seeking to convince the EU institutions and the other member states it should be entitled to a total of EUR 14 B in EU funding for the next EU budget period, 2014-2020, Prime Minister Borisov declared after meeting with EU Commissioner Johannes Hahn.

"We are striving for about EUR 14 B for the next programming period, and for the time being they would set aside only EUR 8 B for us," Borisov stated in Sofia at his joint news conference with EU Commissioner for Regional Policy Johannes Hahn.

The Bulgarian PM made it clear that his government will put up a lot of efforts into the negotiations for the EU funding for 2014-2020.

"We absolutely need to reach an absorption rate of over 50% of EU funds next year. Otherwise, when we are holding talks for the next budget framework, they will say, "We will grant you a billion over what you've absorbed, and that's it," Borisov said.

He revealed that EU Commissioner Hahn has recommended that Bulgaria should team up with its neighbors when demanding EU money for certain projects because each EU member state is trying to get more EU funding because of the economic crisis; an example in hand is Bulgaria's joint project with Romania for the construction of the second bridge on the Danube River, the so called Danube Bridge 2.

EU Commissioner for Regional Development pointed out that Bulgaria has achieved a certain degree of progress in the absorption of EU funds but that it is still lagging behind.

"You are still behind but you did start late when it comes to the absorption of EU money. You are already catching up, and have achieved remarkable progress. The absorption rate is increasing. 2011 and 2012 are the years when all EU member states are getting down to the realization of the EU-funded projects," Hahn told reporters at his joint news conference with Borisov.

He did point out, however, that Bulgaria's hopes for a more massive amounts of EU funds for the 2014-2020 period might be frustrated if the EC draft proposal in question is adopted; in this case, the money that Bulgaria will be entitled to get from the EU will exceed barely the amount slated for it for 2007-2013.

At his joint news conference with Bulgarian Finance Minister Simeon Djankov, EU Commissioner for Budget and Financial Planning Janusz Lewandowski, who was also in Sofia on Friday, also said that for the next seven-year financial period Bulgaria will certainly be entitled to at least as much EU money as it was entitled to receive in 2007-2013.