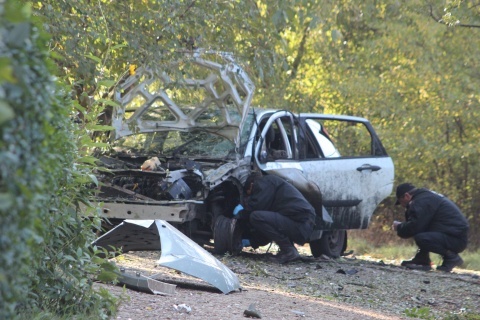 TV journalist Sasho Dikov's car was blown up at about 10 pm in front of the residential building he lives in. Photo by Sofia Photo Agency

In a Friday interview for state-owned TV channel BNT, he said that the timing of the incident had been set to coincide with the visit of European Commission President Jose Barroso and a delegation of the European People's Party (EPP).

"It is clear that it was part of a plan to cast a shadow on the event. You see, the EC President and the EP President, the most important people in Europe, arrive to say that Bulgaria is doing fine, to show their support, to congratulate us on the improved EU funds absorption, to say that they will help to finance the Hemus highway, which is something we promised to the city of Varna, and their nerves failed them," Borisov commented.

The Prime Minister insisted that the plot against the TV journalist and program director of Channel 3 had been stitched up quite clumsily, "using white thread".

Borisov ruled out allegations that the assault had been staged against Dikov on the basis of his work as a journalist.

"Thursday evening I had two phone conversations with both Channel 3's owner and Sahso Dikov and both of them were well aware who had done it and why," the Prime Minister clarified.

Borisov spoke after taking part in the session of the Political Bureau of the European People's Party (EPP) held in Sofia.

Tsvetanov said that the blast had most likely been staged by people who believed that the incident could come in handy for their pre-election campaign.

He vowed that the perpetrators of the crime would be revealed promptly.

Tsvetanov refuted allegations that the July 2011 blasts in front of the offices of the marginal conservative Law, Order and Justice party (RZS) and the right-wing Democrats for Strong Bulgaria (DSB) had gone unpunished, saying that arrests had been made in connection with the incident at RZS' headquarters.

"I am positive that the case with Sasho Dikov's car will also be resolved," he assured.