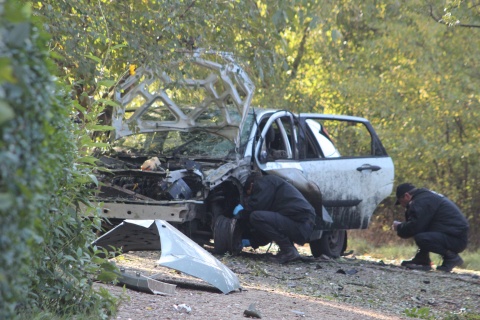 TV journalist Sasho Dikov's car was blown up at about 10 pm in front of the residential building he lives in. Photo by Sofia Photo Agency

Bulgarian Parliament Chair Tsetska Tsacheva has laid the blame for Thursday night's car blast of journalist Sasho Dikov at circles which are opposed to Bulgaria having a good reputation abroad.

The car of the TV journalist, known for his critical attitude to the center-right government, exploded about 10pm on Thursday in front of the block of flats he lives in.

The high-profile EU delegation arrived in Bulgaria's capital to hold an open session of the Political Bureau of the European People's Party (EPP).

According to Tsacheva, there is more than a criminal aspect to the car blast, given that it took place hours after the arrival of EC President Barroso and after the EP voiced its support for Bulgaria's Schengen accession.

The Parliament Chair said that the fact that things like that were allowed to happen meant that the plotters from the first years of the democratic rule in Bulgaria had not been restrained.  /subdued

"These are individuals who do not wish Bulgaria to look good in the eyes of its European partners", Tsacheva stated.

She stressed the importance of keeping calm and refraining from political comments so that the investigative authorities could do their job without being pressured.

"I call on the competent bodies to do everything possible to make sure that the instigators, the perpetrators and the accomplices get apprehended and brought to justice", Tsacheva said.

She termed allegations of the authorities' involvement in the attempt to intimidate a critically-minded journalist "highly na?ve and belittling of those in power".

Commenting on the car blast for private TV channel bTV, political scientist Ognyan Minchev echoed the opinion that the timing of the incident had been set to coincide with the visit of senior EU officials.

He argued that the explosion had been orchestrated to signal insecurity and unrest in Bulgaria.

Sociologist Kolyo Kolev emphasized that the act of violence had been organized by persons interested in whipping up tension.

Yulii Pavlov said that the blast very much reminded him of the explosion in front of Galeria weekly's office in February which again took place during a high-profile visit of EU officials.

The assault against Sasho Dikov is the third act of violence this year coinciding with a crucial EU decision or event for Bulgaria, Dnevnik daily reminds in a publication.

The newspaper highlights the similarities with the February blast at the office of the anti-government Galeria weekly and the July  explosions in front of the offices of marginal conservative party Order Law and Justice (RZS) and Democrats for Strong Bulgaria(DSB).

The February explosion happened during a visit of three EU Commissioners to Bulgaria, while the July blasts occurred one day before the release of the European Commission's report under the cooperation and verification mechanism.