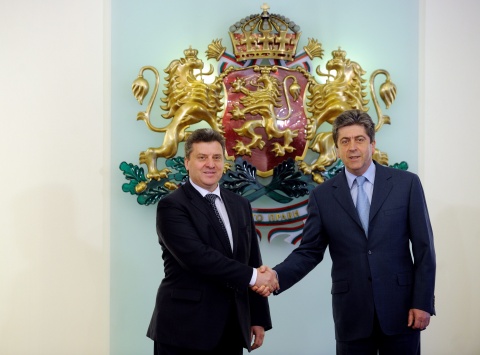 The progress report issued by the European Commission on Wednesday, October 12, 2011, confirmed for a third-consecutive year the EC endorsement for the start of EU accession talks for Macedonia.

However, on Thursday, it was followed by the grumpy reaction of Macedonia's head of state because "the manner of naming the language and ethnic affiliation, which represent issues of observing elementary human rights and human dignity," Macedonian news agency MINA reported.

"I sincerely regret to address you for the second time over a problem, for which I feel the obligation and commitment as President towards Macedonian citizens. I would like to express my dissatisfaction from the selective application of United Nations guidelines reflected in the European Commission report. We have discussed this topic on several occasions and I feel obliged to again express my dissatisfaction from the absence and failure to use the adjective 'Macedonian' in the EC report", says Ivanov.

MINA points out that the UN has listed Macedonia's language and people as Macedonian, however the EU has refused to use it since 2006. This has resulted from the ongoing Macedonia-Greece name dispute, in which Greece objects to Macedonia's being name "the Republic of Macedonia" because of references to the geographic and historical region of Macedonia including parts of Northern Greece, The recognition of the name, Athens fears, can give rise to territorial claims.

Because of Greece's veto, Macedonia was admitted in the UN under the name "Former Yugoslav Republic of Macedonia," it still has not received a data to start talks of EU accession, and has been left out of NATO even though it was supposed to get an invitation to join back in 2008.

The Macedonian President believes that the omission of the Macedonian denonym in the EC documents "is not helpful in the efforts undertaken by the Republic of Macedonia in finding a mutually acceptable solution to the imposed dispute towards unblocking the country's Euro-Atlantic integration."

"By this, the European Commission can additionally complicate the already complex nature of the imposed dispute, since it touches upon the identity of the Macedonian language and ethnic affiliation, on which it is absurd to debate and which are not involved in the process of settling the UN-led imposed dispute", stresses Ivanov in the letter to Barroso.

He says the EC Report represents a real evaluation of the situation in Macedonian society and the level of achieved development in line with European integration criteria.

"I expect that the entire society, all social and political stakeholders, will demonstrate maximum commitment to the overcoming of all noted shortcomings in the Report. I assure you that I will closely monitor this process and invest my authority in this regard. In the current status-quo state regarding Macedonia's integration processes, the country has no other option than to invest all of its means and forces at disposal in the achievement of all criteria, standards and values of the European Union", emphasizes Ivanov.

He also expresses satisfaction from the maintenance of the recommendation for start of EU accession negotiations in the EC report.

"I hope that European partners and leaders of EU member-states will demonstrate vision for Macedonia at the coming European Council meeting by giving the country a date for beginning of membership negotiations. Thus, the European Council will confirm its credibility and principles, enabling fair treatment for the Republic of Macedonia and its citizens", underlines President Gjorge Ivanov in the letter addressed to EC President Jose Manuel Barroso.

While Macedonia has been tangled in a dispute with Greece over its name, Bulgaria and Macedonia were in an argument all throughout the 1990s over the existence of a "Macedonian nation" and a "Macedonian language" even though back in January 1992 Bulgaria became the first ever sovereign nation to recognize the independence of its neighbor, under its constitutional name, i.e. "The Republic of Macedonia."

However, the Bulgarian state, society, and historians traditionally regarded the Slavic population of Macedonia to be ethnic Bulgarian, with the Macedonian nation formally being "set up" by the authorities of Tito's Communist Yugoslavia only in 1944, and its language to be a dialect of the modern-day Bulgarian. This concept is based on historical records, documents, and events from the Middle Ages and the 19th and early 20th century.