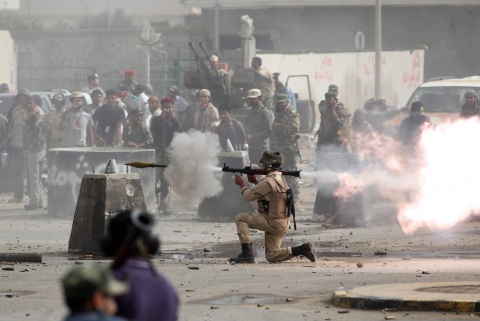 A Libyan Rebel fighter (C) fires an RPG, during the battle to liberate the city of Sirte, Libya, 13 October 2011. EPA/BGNES

Forces of the government of the Libyan rebels have pulled back under ferocious fire from Muammar Gaddafi loyalists in the fugitive leader's hometown Sirte on Thursday.

The troops of the rebels' Transitional National Council had been hoping to overwhelm the last pockets of resistance in two residential neighbourhoods in the northwest of the city, Al Jazeera reported.

However, after the fierce fight Thursday, the rebel forces withdrew at least two kilometers to the central police headquarters they captured on Tuesday.

"We have been told to retreat to the police HQ and will be using artillery cannon to hit Gaddafi's forces," fighter Hamid Neji of the Martys of Free Libya Brigade said, as cited by Al Jazeera.

Earlier on Thursday, a senior military commander inside Sirte refuted reports that Motassim Gaddafi, one of the sons of the fugitive dictator, had been captured.

"It is not true that Motassim was captured," said Wesam Bin Hamid, brigade commander of the Martyrs of Free Libya Brigade, one of the new regime's main units inside Gaddafi's hometown.

"But some prisoners we have captured are saying that [Muammar] Gaddafi is in Sirte," Bin Hamid added.

In spite of that, Muammar Gaddafi's whereabouts remain unknown some eight months after the start of the civil war in Libya.

Gaddafi combatants are now surrounded in the city and are said to number no more than 2 000.