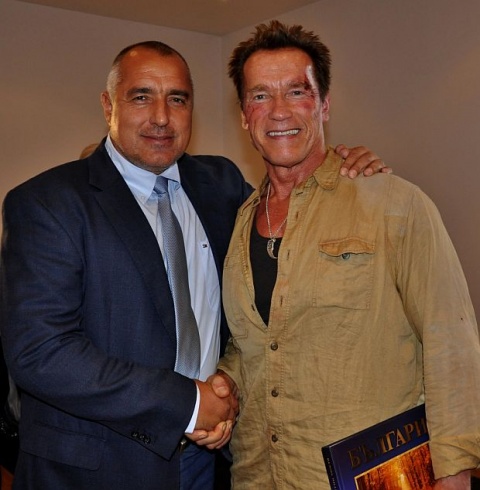 Movie-star-turned California Governor Arnold Schwarzenegger, who is shooting in Sofia the hit film The Expendables 2, is guarded by bodyguards of a company connected to the notorious TIM.

Pictures taken during Schwarzenegger's arrival at the Sofia International Airport, published in Bulgarian media, show a Mercedes SUV, waiting for the actor, with license plate C4401XA, registered to a company owned by the Varna-based TIM. According to unconfirmed reports, the SUV is armored to the 7b level, which is very rare in Bulgaria.

Another picture portrays kick boxer Todor Todorov standing close to Schwarzenegger. Todorov is a competitor of the TIM sports club and a bodyguard, employed by the Sark Group company, founded in 2004 by Krasimir Alexandrov, former chief of security of TIM boss Marin Mitev. The company is currently owned by Rosen Nyagolov, former supervisor in the TIM security company TIM SOT, the site for investigative journalism bivol.bg writes.

In 2004, Sark Group has given a loan on BGN 1.4 M to TIM Holding Varna and another BGN 1.2 M to St. St. Konstantin and Elena Holding with a 1% interest rate, a check of the public accounting books of the companies, conducted by bivol.bg reveals.

The security activities of TIM are spread among several firms with the most popular one being TIM EOOD, offering VIP security services in Bulgaria and abroad, according to the official internet page tim.bg.

In addition to security services, TIM offers training for bodyguards at the TIM Security Academy in Varna, which has its own shooting range.

The Nu Boyana studios, contacted by bivol.bg, have declined giving information about the company providing security for Hollywood stars, shooting in Sofia, and in particular for Schwarzenegger.

In a diplomatic cable from 2005, TIM is called by former US Ambassador in Sofia, James Pardew "the new leader in Bulgarian organized crime," and the "most modern form of organized crime" by investigative German journalist, Jurgen Roth.

Schwarzenegger, Sylvester Stallone, Chuck Norris, Bruce Willis and Jason Statham are in Bulgaria for the shooting of the"The Expendables 2" at the Nu Boyana Film Studios.