Bulgaria Slashes 2012 Growth Forecast Down to 2.5% 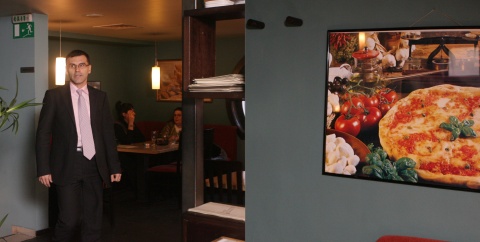 Bulgaria’s Finance Minister Simeon Djankov is pictured here next to a photo of a meatless pizza, which he famously used as a metaphor for the austerity 2010 budget. Photo by Sofia Photo Agency

Bulgaria's government has sharply revised downwards its economic growth forecast for next year from 4,2% to 2,5%, citing the slow-down in Western Europe.

"My preliminary estimates for next year's growth are around 2.5%," Finance Minister Simeon Djankov said, adding that obviously the previous forecast for 4.2% was unrealistic given "the current events abroad".

Germany, Bulgaria's biggest trading partner, is recording a slow-down in its economic growth for the second quarter and has cut its forecast for the next one, the minister specified.

The Finance Ministry is expected to submit the budget draft for next year to the government next week. After the cabinet gives it the green light, it will be tabled for debates in parliament.

All forecasts for the Bulgarian economy in 2011 are below the 3.6% growth projected by the Bulgarian government in its 2011 budget.