US Thwarts Terror Attack by Iranians to Assassinate Saudi Ambassador 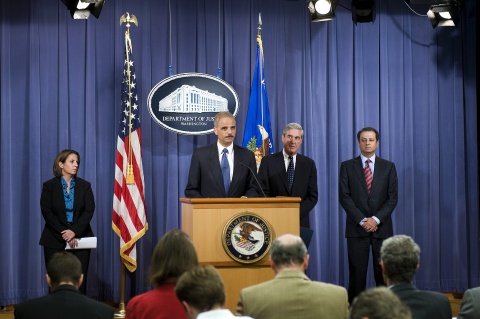 The United States said Tuesday it had prevented a terrorist attack "conceived, funded and directed from Iran".

According to Eric Holder, Attorney General of the United States, the plot included the assassination of the Saudi ambassador to Washington and attacks on diplomatic missions in Washington, BBC News reported.

The two terror plotters originally from Iran - one a naturalized US citizen - have been charged with counts of conspiracy.

In Holder's words, the plans for the attack were stitched together in Iran by the Quds Force, part of Iran's Revolutionary Guard Corps.

The United States Attorney General vowed that Iran would be held accountable for its actions because it involved senior Iranian government officials.

The US State Department has listed Iran as a "state sponsor" of terror since 1984.

The White House, State Department, and Treasury Department have pledged to agree on new measures against the Iranian government in response to the thwarted attempt to assassinate the Saudi ambassador.

The two accused were named as Manssor Arbabsiar, a 56-year-old naturalized US citizen with dual Iranian and US passports, and Gholam Shakuri, based in Iran and said to be a member of Iran's Quds Force.

Arbabsiar was arrested in end-September and he has confessed to his involvement in the alleged plot, while Shakuri is believed to be in Iran, Holder said at Tuesday's press conference.

The plot started to unravel in May, when Arbabsiar approached an informant for the US Drug Enforcement Agency who was posing as a Mexican drug cartel member, seeking his help for the assassination of Saudi ambassador Adel al-Jubeir.

A sum of USD 100 000 was transferred for the killing, according to counter-terrorism officials.

He did not enter a plea and was held without bail.

If convicted on all charges, he could face a life prison sentence, the Department of Justice said.

Ali Akbar Javanfekr, spokesman for Iran's President Mahmoud Ahmadinejad, told CNN that he had never heard of the two people in question.

"I think their goal is to reach the American public. They want to take the public's mind off the serious domestic problems they're facing these days and scare them with fabricated problems outside the country", Ahmadinejad's spokesperson stated, adding that if the individuals were confirmed to be Iranian citizens, the government would make every effort to help them.