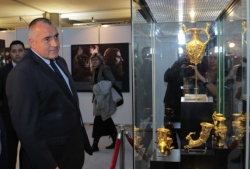 Bulgaria's Prime Minister, Boyko Borisov, at the opening ceremony of the Bulgarian Thracian Treasures exhibit at the building of the European Parliament. Photo by bTV

Bulgaria is a stable country and the safest border of Europe and of the Schengen Zone, according to Prime Minister, Boyko Borisov.

Borisov made the statement Tuesday evening in Brussels during the opening ceremony of the Bulgarian Thracian Treasures exhibit at the building of the European Parliament.

"Since May, Bulgaria is practically guarding the Schengen border because we have fulfilled all criteria. We have Cougar and Panther helicopters, and the best cutters. We guard this border with the best equipment and technology in the world," Borisov declared, adding he believed in the people at the European Commission, the EP, and the Council of Europe, to make the right decision for Bulgaria's joining of Schengen.

The PM further stated that representatives of the European People's Party, EPP, are arriving in Bulgaria Thursday to learn firsthand about the country's fiscal discipline and border control.

In his address at the opening ceremony, Borisov said EP President, Jerzy Buzek, was one of his personal friends and thanked Culture Minister, Vezhdi Rashidov, for organizing the exhibit and making if possible.

The PM informed that State has given a substantial guarantee in order for the treasures to travel outside the country. He said he hoped that everyone who sees these treasures will change their mind about Bulgaria.