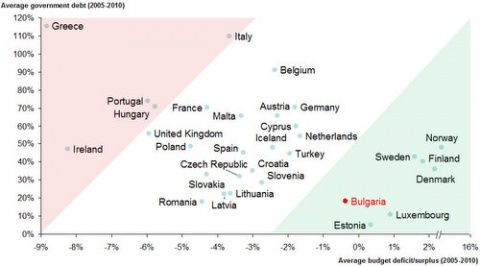 In spite of the fact that statistics suggest a low amount of FDI in Bulgaria in 2011, the InvestBulgaria Agency has seen a growing number of investment delegations and inquiries, its Executive Director Borislav Stefanov told Novinite.com (Sofia News Agency).

Commenting on statistical data of the Bulgarian National Bank indicating that Bulgaria saw an outflow of FDI in the first half of 2011, Stefanov said the situation with foreign investments in the country is hardly different from that in 2010 or 2009.

He explained that the "negative FDI" in the first months of 2011 was due to Bulgarian subsidiaries of foreign companies repaying loans to their parent firms, and that these developments, if anything, demonstrated the stability of the Bulgarian economy because the Bulgarian subsidiaries in question could afford to pay back the funds they got for investments in Bulgaria a few years ago. Only three major foreign companies accounted for loan repayments to parent firms worth almost EUR 700 M in the first half of 2011.

"What we see is that there is definitely growing interest among international investors towards Bulgaria," Stefanov told Novinite.com (Sofia News Agency) in an interview.

"In 2010, we had probably two or three foreign companies send in high-ranking management delegations to enquire about large-scale investment projects, and 20-30 information requests.

Only in the first seven months of 2011, we had visits by 15-20 senior management delegations, and over 100 enquiries. Things are looking brighter from this point of view. It will take 2-3 years before we see new jobs from these projects but investor interest in Bulgaria is definitely growing," he explained.

He noted the FDI statistics methodology of the Bulgarian National Bank, which divides FDI into two large groups. The first group includes investments in finance, trade, and real estate, which in 2005-2008 formed the overwhelming amount of foreign investment in Bulgaria.

The second group includes all other sectors – manufacturing/industry, energy, and telecommunications.

As far as the amount of FDI that Bulgaria will get in 2011 is concerned, the head of the InvestBulgaria Agency pointed out that investments in manufacturing and energy in Bulgaria are pretty constant – about EUR 1-1.5 B per year - but that a precise prediction about the end balance could not be made because of the intercompany loans.

"In this respect, 2010 was no exception – we had about EUR 900 M of FDI invested solely in industry, while the investments in all sectors except for finance, trade, and real estate amounted to about EUR 1.3 B, out of a total FDI of EUR 1.64 B at the end of 2010," Stefanov said, adding, "It's important to note that when Bulgaria's economy attracted the most impressive amounts of FDI in the recent years, these amounts were impressive primarily because of the large investments in finance, trade, and real estate. The foreign investments in the other sectors are relatively constant, and will most likely remain constant in 2011 as well.

He also announced that the InvestBulgaria Agency is entering the "publicly visible" phase of several major projects designed to boost Bulgaria's promotion with foreign investors, including by organizing international business conferences in Europe, North America, and Asia.

At the same time, the Bulgarian investment authority is working on new amendments to the Investment Encouragement Act designed to diversify the incentives for investments in various sectors, with new measures placing a new emphasis on the services sector.

While noting that Bulgaria's investments that by the end of 2010, East Asian countries combined – China, Japan, South Korea, etc, had invested about EUR 200 M in Bulgaria, which is 0.5% out of a total of EUR 40 B of FDI in the past 20 years, the head of the InvestBulgaria Agency expressed optimism that a couple of success stories could bring a boost to investments from non-EU destinations such as China.

"I am rather optimistic in that respect that when the car manufacturing plant of Great Wall Motors and Litex Motors in Bulgaria's Lovech starts production, this will emerge as a major success story. The planned Bozhurishte Industrial Zone near Sofia has good potential and all prerequisites to attract such investments," Stefanov concluded.