Bulgaria's Passion for Dilma. A Bit over the Top? 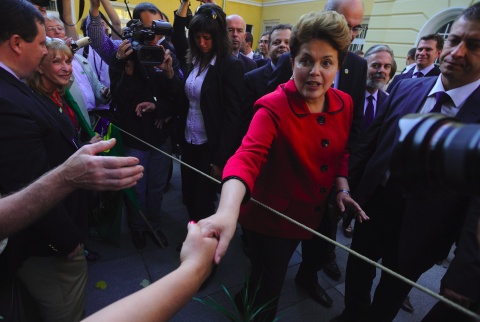 Dilma Rousseff has become one of the very few politicians, whom Bulgarians endearingly call by their first name. Photos by EPA/BGNES and Sofia Photo Agency

If Kenya celebrated the victory of Barak Obama, Bulgaria had every right to celebrate 'Dilma' of Bulgarian descent. But the expectations over the Brazilian president's visit here were way too high.

The huge spick-and-span windows of Bulgaria's first gymnasium reflect the rays of the scorching sun as hundreds line up for a chance to take a glimpse of a woman who has made  headlines all over the world. Once she appears, the silent crowd breaks into cheers and applause.

The Dilma hype exploded in Bulgaria last year before her election as Brazil's president, lagged during the beginning of the year, only to recapture Bulgarians' fancy in early fall in just one more proof that the post-communist country often finds its heroes abroad. "I came because we, Bulgarians, are in desperate need of inspiration, which the impotent and corrupt local politicians are unable to provide," explains Vera, an elderly woman, radiant despite the long hours spent outside.

Alex, one of the young people waiting in the line says he really wanted to see Dilma, because "here, she is our President". Here meaning the small central town of Gabrovo. The citizens of Gabrovo, a hard-luck but endearing Bulgarian town at the foot of the central Balkans, where the father of Brazilian president Dilma Rousseff was born, were caught up in a rarely seen excitement over the high-ranking visit and basked in newly found notoriety. Proud to have links with the President of one of the world's greatest nations, they hoped she will recover her roots.

There was not a single lofty smirk on the faces of the people in Gabrovo, but quite many in the capital Sofia where president and prime minister rushed to see the visit as a chance for the economic salvation of their poor and striving to survive country.

Economic hardship and unpopular pension and health reforms are breeding discontent with a government elected two years ago on a promise to clean up corruption and boost Bulgaria's competitiveness. Prime Minister Boyko Borisov openly declared he sees the Bulgarian descendent, who rules over the world's seventh largest economy, as a way out of the crisis.

President Georgi Parvanov could not resist the temptation to revive the rhetoric reminiscent of the country's recent communist past and even offered cooperation in the nuclear energy sector.

One newspaper called Dilma "our girl", another called her the walking checkbook, while officials endowed her with supernatural powers, hoping her charm, popularity and authority will lead to a miracle in the polls.

But salvation may hardly lie in Bulgaria's ties with Brazil, even though it is a rising economic giant, which boasts a 7.5% increase in GDP in 2010 and a wealth of natural resources.

Overshadowing the optimism is the fact that being very small and a member of the European Union Bulgaria has no practical chance to be clearly visible on the map of Brazil or any other South or Latin American country.

President Rousseff said that the two countries must work on reversing the trend of decreasing trade. She described Bulgaria as an important manufacturer of fertilizers and said it could become a preferred partner of Brazil in its effort to increase farming productivity.

Her Bulgarian counterpart, Georgi Parvanov, expressed confidence that the increase in trade between Bulgaria and Brazil several times to reach USD 1 B a year was an achievable goal. The current trade is estimated at USD 100 M. Parvanov pointed out that in order to achieve this goal, the business must research opportunities in the energy sector, nuclear energy, renewable energy resources, agriculture, joint production of food products.

But the only concrete major project concerns plans for purchasing a few Embraer planes for national carrier Bulgaria Air. While the hopes of the economy ministry that the Brazilian company will turn Bulgaria into a regional hub for the maintenance of its planes will most probably go sour having in mind the strong positions of the other rival Poland.

That's as concrete as the talks got.

Which is a shame because there is so much to ask. How can Bulgaria overcome the protectionist policy of the big economies? How can Bulgaria deal with the high excise duty fees that the European Union imposes on agriculture products from countries outside the bloc? With what will Bulgaria replace the bankrupt Kremikovtzi steel mill, which used Brazilian iron ore and was the backbone of the economic relations between the two countries? It is indicative that in Brussels, where Rousseff spent the first couple of days from her first full official visit to Europe, she met the usual roll call of European-Union bigwigs, but was tight-lipped on the pressing matters, including whether Brazil can help Europe exit from its debt crisis.

But when she jetted off to Turkey, one of Brazil's biggest European partners in Europe, the Brazilian president said that economic crisis was an opportunity for Turkey and Brazil bearing in mind their bilateral relations and capacities. For the sake of comparison - while bilateral trade between Bulgaria and Brazil last year stood at about USD 100 M, this year the South American country expects its trade with Turkey to total USD 2 B.

Did Kenya benefit because of Barak Obama's family origin? Or Did Hungary raked in economic gains after Nicolas Sarkozy won the French presidency?

A quick hello in the home country of your ancestors does not really count much in the world of business.