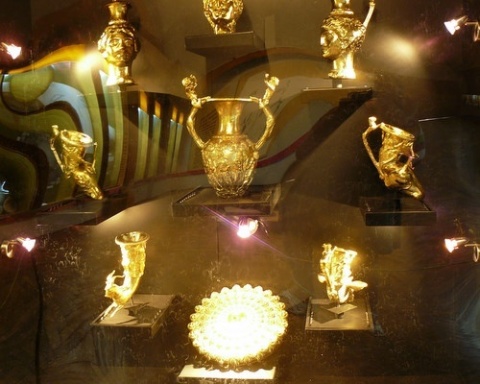 Eight Thracian treasures from Bulgaria are already attracting crowds at the main lobby of the European Parliament in Brussels.

The exhibit, which showcases Bulgaria's ancient past and culture, is going to be officially opened Tuesday evening by Prime Minister Boyko Borisov and the President of the European Parliament, Jerzy Buzek. It is organized on the initiative of the Member of EP from Borisov's ruling Citizens for European Development of Bulgaria, GERB, party, Emil Stoyanov, in partnership with the Culture Ministry and the National History Museum.

The display has over 100 objects from 6 Bulgarian museums and includes treasures discovered in Panagyurishte, Rogozen, Letnitsa, Borovo, Malomirovo and Dalakova Mogila.

There are also pictures of Thracian archeological heritage, such as the murals of the Kazanlak Tomb. Some of the most interesting pieces are the armor of a Thracian warrior discovered near the town of Gotse Delchev in southwestern Bulgaria, a sword from the village of Chernozem, near Plovdiv, a rein from Rogozen, and the gold masque from the village of Topolchene, kept at the museum of the city of Sliven, which is being displayed abroad for the very first time.