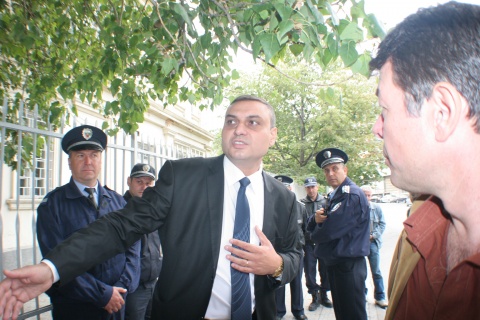 Kaloyan Dimitrov, prosecutor for the Kiril Rashkov case, has said that the indictment will be prepared as soon as possible. Photo by BGNES

Kiril Rashkov Jr, the grandson of notorious Bulgarian Roma boss Tsar Kiro – Kiril Rashkov Jr., has decided not to appeal the measure of restraint imposed by the Asenovgrad Regional Court and will remain under arrest.

He has been charged with issuing death threats to Veselin Hristov, the maternal uncle of 19-year-old Angel Petrov who was killed on September 23 in the southern village of Katunitsa by an alleged associate of Tsar Kiro.

Hristov filed a complaint on October 01 over threats made some 5 to 10 minutes before Angel Petrov got run over by a van.

Kiril Rashkov Jr. was expected to lodge an appeal against the measure on Tuesday before the Plovdiv District Court but sources close to the matter have said that he will prefer to kept in custody as his grandfather did due to the tensions in Katunitsa.

The grandson of the Roma clan leader turned himself in to the police on October 03 after becoming the subject of a nationwide search.

He was placed under arrest, the heaviest measure of restraint, as the Asenovgrad Regional Court ruled that he was likely to go into hiding or commit another offence.

The prosecutor for the case said that Kiril Rashkov Jr. had been exceptionally aggressive when making threats to Veselin Hristov.

He further vowed that an indictment of Kiril Rashkov and his grandson would be prepared as soon as possible.

In the meantime, data provided by the Supreme Cassational Prosecutror's Office to the Legal World magazine showed an unprecedented spike in cases of incitement to ethnic hatred.

According to the publication, no penal proceedings were launched in the first half of 2011 for crimes against national and racial equality.

However, events in Katunitsa and the ensuing waves of protests across the country resulted in 11 such proceedings opened in the period September 23 - October 03.