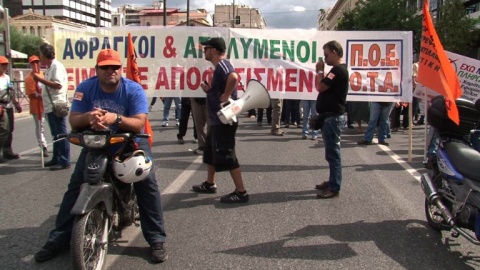 Strikes swept across Greece on Thursday amid new budget cuts, with doubts growing that the government can force through the latest EU-IMF conditions for funds to avert defaulting and unleashing chaos in the eurozone. Photo by EPA/BGNES

Debt-laden Greece must either give up part of its sovereignty or leave the euro zone to avoid the looming default, a leading conservative member of the German parliament has stated.

"You are very close to bankruptcy," Michael Fuchs, a deputy parliamentary floor leader for Chancellor Angela Merkel's Christian Democrats (CDU), said in an interview for the Greek newspaper Real News.

"We can not agree to a 'haircut' without terms and conditions and therefore, Greece must give up something, like some of its national sovereignty -- at least temporarily."

"I am personally not absolutely convinced that this (euro zone membership) is the best long-term solution for Greece to become quickly competitive," he added.

Last month Greek officials denied a report in the local media that the government is considering the possibility of leaving the euro zone and reintroducing its own currency.

"No. We haven't discussed such an issue, definitely not," deputy government spokesman Angelos Tolkas told reporters.

He said the government had put to parliament a bill aimed at allowing the country to hold referenda but without specifying any issue.

The statement came after Kathimerini daily reported, citing unnamed sources, that Greek Prime Minister George Papandreou is considering calling for a referendum on whether Greece should continue to tackle its debt crisis within the euro zone or exit the single currency.

Papandreou had previously resisted calls for a euro referendum, but now was said to hope that the outcome would give a fresh mandate for his Socialist government to continue with an austerity drive backed by Greece's international lenders -- the European Commission, the European Central Bank and the International Monetary Fund, the newspaper said.

The cabinet is reportedly split over the idea, which if confirmed at some point later, will come as a dramatic and illogical U-turn of the Greek government policy so far.

Analysts have commented that there are not many chances that the pro-euro lobby will win in the referendum and besides austerity measures are never popular.