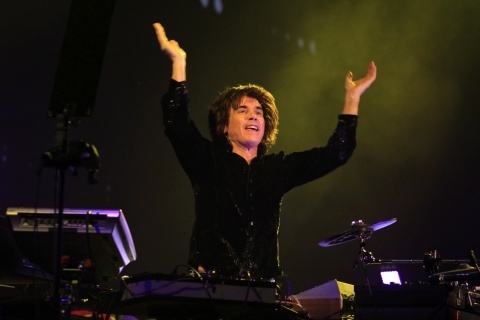 Jean-Michel Jarre, the French legend of electronic music, delighted thousands of fans during his first concert on Bulgarian soil on Sunday.

Even though the gig began 50 minutes later than initially announced, it was described as a success by the excited audience and the Bulgarian media. Jarre's concert was accepted as a historical event in Sofia, as it was the first concert to be staged in the city's brand new sports and performance facility "Arena Armeets".

During his performance, Jean-Michel Jarre stated his Sofia visit was emotionally charged, since Bulgaria was among the first countries outside France started appreciating his music. The first letter the prominent musician received from a fan outside France was from Bulgaria, he revealed.

Jean-Michel Jarre (born August 24, 1948) is a French composer, performer and music producer. He is a pioneer in the electronic, synthpop, ambient and New Age genres, and known as an organizer of outdoor concerts, featuring lights, laser displays, and fireworks.

Jarre was raised in Lyon by his mother and grandparents, and trained on the piano. From an early age he was introduced to a variety of art forms, including those of street performers and jazz musicians. He also played guitar in a band.

His first mainstream success was the 1976 album Oxygen (Oxygene). Recorded in a makeshift studio at his home, the album sold an estimated 12 million copies. Oxyg?ne was followed in 1978 by Equinox (?quinoxe), and in 1979 Jarre performed to a record-breaking audience of more than a million people at the Place de la Concorde, a record he has since broken three times.

Several of his albums have been released to coincide with large-scale outdoor events.

Jarre has sold an estimated 80 million albums and singles. He was the first Western musician to be allowed to perform in the People's Republic of China, and holds the world record for the largest-ever audience at an outdoor event.

The concert in Sofia is part of the 2011 European tour of the French composer and musician.