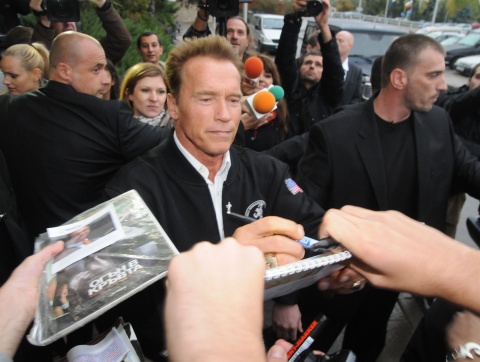 Arnold Schwarzenegger was the only "Expendable" action hero who stopped to give a couple of autographs at Sofia Airport on Sunday. Photo by Sofia Photo Agency

After Sylvester Stallone showed up in Sofia last week, three more legendary Hollywood action stars have arrived in Bulgaria for the filming of "The Expendables 2", the sequel of the hit movie.

Chuck Norris, Jason Statham, and Arnold Schwarzenegger all landed at Sofia International Airport on Sunday from where they were picked up by representatives of the Nu Boyana Film Studios where "The Expendables 2" is being shot.

Schwarzenegger was the only one of the action stars who stopped for a couple of minutes at the outside the VIP terminal of Sofia Airport to give a few autographs.