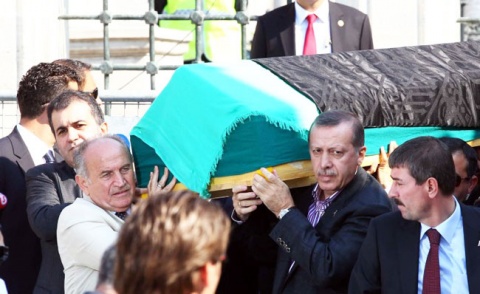 Turkish PM Recep Tayyip Erdogan has canceled a scheduled meeting with Brazilian President Dilma Rousseff, who is on an official trip to Turkey, due to his mother's death.

Tenzile Erdogan passed away of acute cholecystitis on Friday and is to be buried Saturday, with solemn prayers held at the Fatih Mosque in Istanbul.

Saturday evening Rousseff was to be guest at an official dinner hosted by Erdogan, but the Turkish PM has now cancelled all official meetings due to the tragic event.

Friday evening the Brazilian President visited Erdogan in his Istanbul home to express her condolences.

Before coming to Turkey, Dilma was on a highly emotional trip to Bulgaria Wednesday and Thursday, not only meeting with Bulgarian leaders, but also visiting for the first time her father's birthplace, the Bulgarian town of Gabrovo.