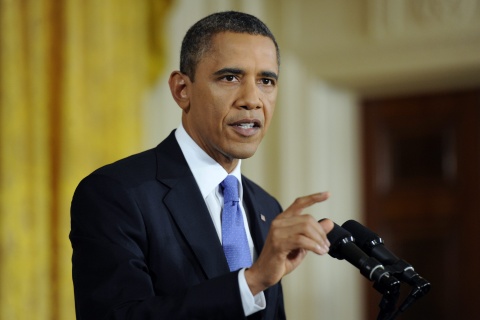 US President Barack Obama has commemorated the start of the Afghanistan War 10 years ago with a special statement. Photo by BGNES

The USA is ending the War in Afghanistan, US President Barack Obama said in a special statement for the 10th Year since the start of the military campaign launched against Al Qaeda and the Taliban in response to the 9/11 terrorist attacks.

The War in Afghanistan began on October 7, 2001, as armed forces of the USA, the UK and the Afghan United Front (Northern Alliance) launched Operation Enduring Freedom.

The invasion was motivated by the September 11 attacks on the United States, with the goal of dismantling the Al Qaeda terrorist organization and ending its use of Afghanistan as a base. The United States also said that it would remove the Taliban regime from power and create a viable democratic state, a challenge that they have been struggling to cope with.

President Obama marked the tenth anniversary of the Afghanistan War by pledging to follow through on plans to turn over the nation's security to the Afghans themselves by 2014.

The International Security Assistance Force (ISAF) was established by the UN Security Council at the end of December 2001 to secure Kabul and the surrounding areas. NATO assumed control of ISAF in 2003. ISAF includes troops from 42 countries, with NATO members providing the core of the force, Bulgaria included.

In his speech, the US President vowed that America will end the Afghanistan War "responsibly" and "from the position of strength."

Following is the full text of Obama's statement on the 10th year since the start of the War in Afghanistan:

Ten years ago today, in response to the 9/11 terrorist attacks, our nation went to war against al Qaeda and its Taliban protectors in Afghanistan. As we mark a decade of sacrifice, Michelle and I join all Americans in saluting the more than half a million men and women who have served bravely in Afghanistan to keep our country safe, including our resilient wounded warriors who carry the scars of war, seen and unseen.

We honor the memory of the nearly 1,800 American patriots, and many coalition and Afghan partners, who have made the ultimate sacrifice in Afghanistan for our shared security and freedom. We pay tribute to our inspiring military families who have persevered at home with a loved one at war. And we are grateful to our tireless diplomats and intelligence, homeland security and law enforcement professionals who have worked these ten years to protect our country and save American lives.

Thanks to the extraordinary service of these Americans, our citizens are safer and our nation is more secure.

In delivering justice to Osama bin Laden and many other al Qaeda leaders, we are closer than ever to defeating al Qaeda and its murderous network.

Despite the enormous challenges that remain in Afghanistan, we've pushed the Taliban out of its key strongholds, Afghan security forces are growing stronger, and the Afghan people have a new chance to forge their own future.

We've fought alongside Afghans, and close friends and allies from dozens of nations who have joined us in common purpose. In Afghanistan and beyond, we have shown that the United States is not and never will be at war with Islam and that we are a partner with those who seek justice, dignity and opportunity.

After a difficult decade, we are responsibly ending today's wars from a position of strength.

As the rest of our troops come home from Iraq this year, we have begun to draw down our forces in Afghanistan and transition security to the Afghan people, with whom we will forge an enduring partnership. As our sons and daughters come home to their families, we will uphold our sacred trust with our 9/11 Generation veterans and work to provide the care, benefits and opportunities they deserve.

And as we reflect on ten years of war and look ahead to a future of peace, Michelle and I call upon all Americans to show our gratitude and support for our fellow citizens who risk their lives so that we can enjoy the blessings of freedom and security.