Dilma in Bulgaria: I Fulfilled My Father's Dream to See His Birthplace 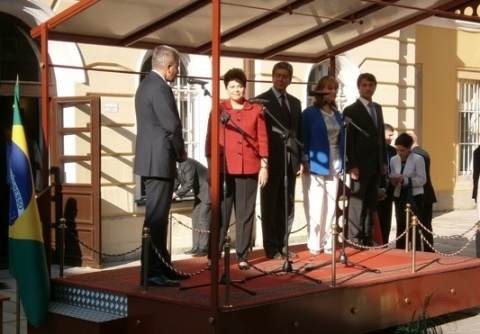 Brazilian President Dilma Rousseff, who is on an official tour in Bulgaria, received a very warm welcome in her father's town of birth, Gabrovo.

"I am extremely moved to have fulfilled my father's dream in visiting his place of birth," said an excited Dilma to the hundreds of Gabrovo residents who had gathered to greet her.

Dilma revealed that together with Bulgarian President Georgi Parvanov she considered the idea of boosting the study of Portugese in Bulgaria and of Bulgarian in Brazil in a bid to forge closer ties between the two countries and their peoples.

A special ceremony was held at Gabrovo's Aprilovska High School, the first Bulgarian high school founded in the 19th c. National Revival Period - and the high school her father graduated from in 1918.

In Gabrovo, the Brazilian President visited a special exhibit entitled "The Bulgarian Roots of Dilma Rousseff," which traces back the lineage of her father Petar Rusev, known in Brazil as Pedro Rousseff.

At the Gabrovo Regional History Museum, Dilma was presented with a 3-meter long family tree researched by local archivists and genealogists, which traces back 300 years of the history of the Rusevs.

The Brazilian President has brought with her to Bulgaria a high-ranking ministerial and business delegation, which has signed important agreements with the Bulgarian party.