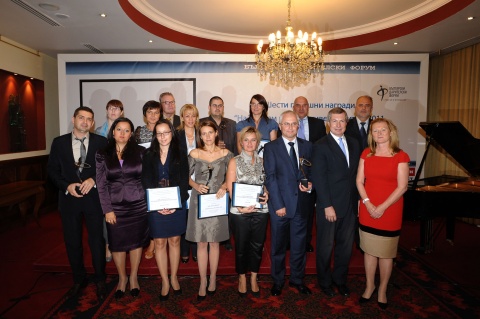 Aurubis Bulgaria, the Bulgarian subsidiary of Europe's largest copper smelter Aurubis, has been awarded as the largest corporate donor in the country.

The corporate donors' awards 2011 were handed Wednesday night, for a six consecutive year, by the Bulgarian Donors' Forum, a NGO. The awards recognize the companies that support sustainable and transparent public initiatives in order to boost corporate donations in Bulgaria.

The donations are assessed by a nine-member jury based on criteria developed in cooperation with similar organizations in the Czech Republic, Slovakia, Poland, Hungary, Russia, and Ukraine. A total of 49 corporate organizations were nominated in categories for the 2011 awards.

Aurubis Bulgaria, the winner in the category for largest financial donations, donated a total of BGN 528 000 in 2010. The second largest corporate donor in Bulgaria is mobile operator M-Tel, with donations totaling BGN 468 000.

Vivacom, a mobile operator, won the prize for largest donations through the volunteering of its staff, estimated at BGN 68 000, followed by M-TEL (BGN 14 700).

Raiffeisenbank Bulgaria grabbed the award for "Most Generous Donor" - based on the donated funds as a percentage of its profit before taxes; it donated 0.6% from its profits in 2010.

AmCham Bulgaria and the "Aid for Charity in Bulgaria" Foundation received an award for "Most Successful Partnership", focusing on the ties between corporate organizations and NGOs.

The Bulgarian Donors' Forum awarded UniCredit Bulbank with the prize for a "Charity Project of the Year," a special prize.

Another special prize for contribution to charity in Bulgaria was presented to Dr. Milen Vrabevski, CEO of Comac Medical, the largest private research and development organization in Bulgaria.