Bulgaria's Gabrovo Basks in New Notoriety Thanks to Dilma 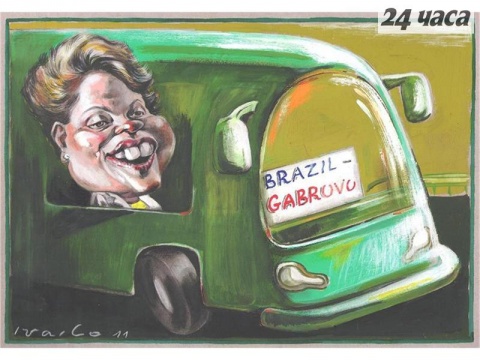 Bulgarian cartoonist Ivailo Tsvetkov has pictured Brazilian President Dilma Rousseff traveling on a bus from Brazil to Gabrovo, where her father was born. Photo by 24 Hours daily

The citizens of Gabrovo, a small town in central Bulgaria, where the father of Brazilian president Dilma Rousseff was born, have been caught up in excitement over her upcoming visit.

Rousseff will visit Gabrovo on October 6 as President of one of the world's greatest nations and her relatives and supporters here, proud to have links with such a high-profile politician, say they hope she will recover her roots.

Dilma Rousseff's father, Peter Rousev, was born in 1900 in the town of Gabrovo, but left Bulgaria for both economic and political reasons (he was a communist), looking for a better job and a brighter future. The citizens of the hard-luck but endearing Bulgarian town at the foot of the central Balkans also hope that the visit will inspire them to change their lives for the better.

"In these times of crisis, it is very important that we seek occasions to take pride in, cheer up and find inspiration to change the world around us. Dilma Rousseff victory in the presidential race is just such an occasion," mayor Nikolay Sirakov said during the opening of a photo exhibition, revealing details of the Bulgarian genealogy of Dilma Rousseff a few months ago.

It is expected that Rousseff will visit the exhibition despite her short stay in Gabrovo of less than two hours.

She however won't have time to tour another major tourist attraction in the town - the House of Humor and Satire. It was conceived by communist officials in a bid to cultivate an image of Bulgaria as an open country, along with the annual carnival, a kind of comic Mardi Gras that was the biggest attraction in Gabrovo for outsiders.

The exhibition "Smiles from Brazil", now displayed at the House of Humor and Satire, is a symbolic salute to the Brazilian president Dilma Rousseff.

The Brazilian president is pictured traveling on a bus from Brazil to Gabrovo and dancing to the tunes of traditional Bulgarian and Brazilian folklore music. On the third cartoon by Nelson Gabrovo calls itself the international capital of humor and its people have a reputation for being thrifty, willing to haggle, and inventive when it comes to money.

True to their funny nature, they are already planning how to profit from Rousseff's link to the town, saying Brazilian investors may learn a lot from them about crisis management.

The mayor has even suggested cooperation between Gabrovo spring carnival of humor and the carnival in Rio.