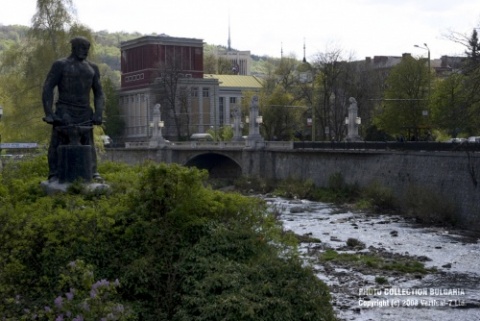 *This is a reprint of the Novinite.com article published on November 1, 2010. The article is reprinted on the occasion of Dilma Rousseff's first ever visit to Bulgaria on October 5-6, 2011.

"Welcome and good riddance", reads the sign that leads into Gabrovo, a hard-luck but endearing Bulgarian town at the foot of the central Balkans.

Small wonder that besides being regarded as the world's capital of humor, it is the place of birth of many of Bulgaria's talented but prodigal children, including artist Christo Yavashev and Dilma Rousseff's father Peter.

Peter Rousev was born in 1900 in the town of Gabrovo, but left Bulgaria for both economic and political reasons (he was a communist), looking for a better job and a brighter future. A century later the small town in central Bulgaria is caught up in the excitement of the presidential run-off in far-away Brazil, which Dilma Rousseff won.

True to their inventive and funny nature, the citizens of Gabrovo are already planning how to profit from Rousseff's link to the town, saying Brazilian investors may learn a lot from them about crisis management. The mayor Nikolay Sirakov has even suggested cooperation between Gabrovo spring carnival of humor and the carnival in Rio.

It will be no big surprise if Gabrovians find a way to draw dividends from Rousseff's links to the town. In the past and nowadays being born in Gabrovo has been considered nothing short of a privilege. Gabrovians are thrifty; know how to haggle and how to produce something out of nothing – a priceless lesson from their forefathers. In times of crisis they resort to their incredible sense of humor - because they have nothing else – a talent, which has inspired a plethora of jokes and legends.

The citizens of Gabrovo have come up with many famous inventions, including the fashion of narrow trousers, short skirts and one-stotinka coin. These people clip the tails of their cats to keep the room warmer and stop their watches at night to save hard wear on the cog-wheels!

If you think this is just a joke, go to Gabrovo and see for youself. Being some 220 km north-east from the city of Sofia, it wont' take you more than three hours and fifteen levs to get there by bus. (And it would be very unreasonable of you if you opt for the train.)

Once you get there there are several places you must visit. (Bear in mind though that Gabrovo is the longest town in Bulgaria, stretching over 25 km along the Yantra, yet reaching only 1 km in width at places.)

The unique open-air museum Etar tops the list of places to visit. Etar is an architectural and ethnographical complex, where the Bulgarian Renaissance atmosphere is recreated by the old-time workshops of traditional Bulgarian art and crafts. Every year it holds an international crafts fair, offering demonstrations of pottery, cutlery, coppersmiths, basket weaving, rope making, wool dyeing, and many others from top craftsmen from all over Bulgaria, Romania, the UK, Morocco and Japan. An interesting competition you can witness here is the contest for stitches from corn husk.

Another place that will take you back to the Renaissance spirit is the architectural and historical reserve of Bozhentsi. This is the place to choose if you want to get away from the hustle and bustle of the city, or if you want to spend a romantic weekend. A number of cosy and comfortable private hotels will offer you high quality services at reasonable prices. Guests can enjoy their stay at the hotel complex stranopriemnitsa (Tavern) famous for its buns and various national dishes.

Legend has that Bozhentsi was founded by a woman with a name of a gift sent from heaven above. Yet it was not Bozhana, but a colourful and witty citizen, who made his way to Bulgaria's folklore and became one of its best known and most loved characters. A man, who walked from the picturesque village of Bozhentsi to the nearby town of Gabrovo barefooted, with his shoes under his arm - not to wear them out!

It is this certain Old Minyo, a 19th-century local of fabled abstemiousness, to whom the Gabrovian wit dates back. Besides carrying his shoes on long walks and sitting in the dark to save wax, Old Minyo was a heroically generous character. At least the way Gabrovians understand this trait.

During Ottoman rule, the rich tradesmen spent plenty of resources for the small town's public planning. The first Bulgarian secular school, the Aprilov Gymnasium, was founded in Gabrovo in 1835 with the aid of Vasil Aprilov and Nikolay Palauzov. Gabrovo was officially proclaimed a town by the Ottoman authority in May 1860.

By the late 19th century heavy industry transformed the town into what people here call "the Manchester of Bulgaria."

But that was then. Now, local industry has died out, the population has thinned, and the town's most distinctive cultural landmark - the House of Humor and Satire – has turned in many ways into a neglected remnant of the former Soviet empire.

Still don't miss out on a visit to the House of Humor and Satire. It was established in the 1970s by local leaders, wanting to capitalize on the annual carnival, a kind of comic Mardi Gras that was the biggest attraction in Gabrovo for outsiders.

Thousands of world famous humorists from more than 150 countries gather at the House of Humor and Satire during the biennial Festival of Humor and Satire. It was conceived by Communist officials in a bid to cultivate an image of Bulgaria as a land, which is open to outsiders, where humor thrives. (within limits, of course). The House became a sort of a window between two worlds.

Nowadays Gabrovians have set their sights on another world, literally. A planet, named after the Bulgarian town of Gabrovo, famous for its residents' legendary sense of humour, was discovered on ...April Fools day. Interestingly, the planet was first detected by the Russian astronaut Nikolay Chernih on April 1, 1976.

Five years later the US Minor Planet Centre officially recognized planet Gabrovo, which enters the list of the solar system, tagged No 2206 spot. In 1981 the municipality of Gabrovo in advance declared for honorary citizen the man who first steps on the small planet. The enthusiasts will have to travel no less than three years to reach it!

Radoi Ralin, a famous Bulgarian writer and a great friend of Gabrovo, wrote once that laughter is the most stable currency of all.

Gabrovo's talented but prodigal children must have surely known they should never start out on a journey without it!