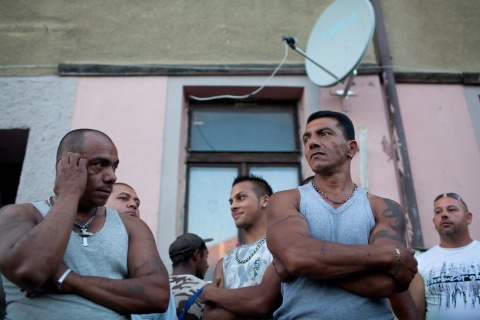 Ethnic Roma men stand guard near their house during an anti-Roma demonstration in Varnsdorf, Czech Republic, on 03 Septmber 2011. Photo by BGNES

The town of Varnsdorf, located in the Czech Republic off the border with Germany, has seen repeated protests against the local Roma minority.

The local rallies have especially targeted about 60 Roma living in a social housing complex; the protests have resulted in the local Roma living in fear, DPA reported Tuesday.

Riot police have been lined up to protect the Roma-inhabited building which has become the focal point of local protest marches. The Roma building is under constant video surveillance, and a permanent police watch has been set up at a neighboring house.

The central government in Prague has drafted in several hundred officers to this remote region for an unspecified length of time.

"Roma to work," chanted the Czech demonstrators. The Roma, however, say no Czech employer of Slav origin is willing to hire them.

"We believe (the protests) could have serious psychological effects on (Roma) children,' says German journalist Markus Pape, founder of a social initiative called Hatred is Not a Solution, as cited by DPA.

Pape organized a film screening and prepared a play to distract the children, who make up two-thirds of Roma at the Sport housing complex.

The black economy is the only chance of employment for the Roma, says one man, who lives on a meagre social welfare allowance together with his wife and five children.

Why there is such hatred of the Roma in Varnsdorf, he cannot say. 'Maybe they just want to live a racist adventure on weekends,' he quips sarcastically, as cited by DPA.

The demonstrators also claim that an influx of Roma has made crime rates soar in Varnsdorf. Police figures, however, show that criminality has risen by just 0.9% over the past five years.

Extensive research by the Radiozurnal radio station was unable to find evidence of any noticeable increase in the number of Roma - now estimated at about 500 people - in the economically underdeveloped town of 16,000 residents.

However, with the unemployment rate in the Decin district running at more than 15%, march organizer Lukas Kohout has been able to attract up to 350 angry demonstrators to protest the Roma presence in Varnsdorf.

The 28-year-old made national headlines in 2002 when it emerged that he had travelled around the world by falsely pretending to be an assistant to former foreign minister Jan Kavan, at the time serving as the chairman of the United Nations General Assembly.

Czech Prime Minister Petr Necas visited the Varnsdorf area in September in an apparent attempt to show he had the situation under control. Necas should be glad he was not robbed, said Kohout, who intends to keep up his anti-Roma campaign.

The protests the Czech Republic's Varnsdorf appear similar in nature to the anti-Roma rallies in major Bulgarian over cities in past 10 days, which erupted after the associates of a Roma boss, Kiril Rashkov, aka Tsar Kiro, ran over and killed, allegedly deliberately, witnesses say, 19-year-old Angel Petrov, an ethnic Bulgarian boy from the village of Katunitsa near Plovdiv.