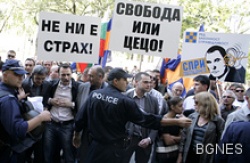 100-200 persons gathered Sunday in downtown Sofia in front of the Ministry of Interior to request the resignation of minister Tsvetan Tsvetanov. Photo by BGNES

Bulgarian police scattered a protest of 100-200 people organized by the Order, Law and Justice (RZS) party requesting the resignation of Minister of Interior Tsvetan Tsvetanov.

Tensions deteriorating into violence and racist slogans have grappled Bulgaria last Saturday after an ethnic Bulgarian youth in the village of Katunitsa was killed by a van driven by Roma.

However, the case is more complicated, the Roma involved reportedly being dependent on controversial Roma clan leader Kiril Rashkov, aka Tsar Kiro.

Rashkov has been long suspected in a range of illegal activities such as bootleging, human trafficking, extortion and vote-buying, but only now authorities have attempted to unveil his doings.

As part of their slogans, protesters have been speaking out against what they see as systematic protection of major organized crime leaders on the part of authorities.

Sunday protesters were shouting slogans such as "Tsetso Out!" and RZS leaders have requested the immediate sacking of Interior Minister Tsvetan Tsvetanov and calling regular police officers to join them.

Some of the protests over the week have turned violent, with people beaten and property destroyed.

Later Sunday, a rally is planned to be held in second-largest city of Plovdiv, which is nearby Katunitsa, by supporter of local football teams Lokomotiv and Botev.

Football hooligans were among those who turned protests over the week into violence, and who have shouted racist anti-Roma slogans.

The fan clubs of Lokomotiv Plovdiv and Botev Plovdiv, who organized the Sunday rally, have vowed that it will be a peaceful event and that no hateful or racist rhetoric will take place.

Bulgaria's Minister of Interior Tsvetan Tsvetanov has been on an official leave since the start last Friday of the campaign for presidential and municipal elections October 23, as the campaign chief of staff of ruling GERB party.

The start of the election campaign nevertheless regrettably coincided with the tragic incident in Katunitsa.