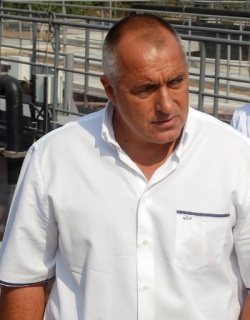 Bulgarian PM, Boyko Borisov, who wants to remain in history as the leader, who built the country's infrastructure, is seen at the opening of the construction of the southern Struma highway. Photo by BGNES

Tensions, surrounding the incident in the village of Katunitsa, are politically motivated, according to Bulgarian Prime Minister, Boyko Borisov.

Borisov made the statement Saturday, during the ground breaking ceremony for Lot 1 of the Struma highway in southern Bulgaria, saying the clashes will certainly subside after the October 23 presidential and local elections.

The PM further pointed out that all perpetrators and instigators are under permanent detention.

"What are they protesting about? We are building highways, daycare centers, we are building Bulgaria every day, this is what we do, and it is a fact. About what? They want to bring back the past – people fighting on the streets and the country being in the state I found it. What more can we do? If this is what people want, let them do it," he said.

On Saturday, Borisov reiterated the tax probe against Tsar Kiro and his associates had begun before Petrov's murder.

"Regretfully, the events developed a week after we launched the probe. He would have been arrested anyway," he pointed out.

Regarding allegations the protests have been and are organized by football club fans, the PM stressed the cabinet has granted BGN 1 M each to the two in Plovdiv – Locomotive and Botev, and plans to help the ones in Sofia as well.