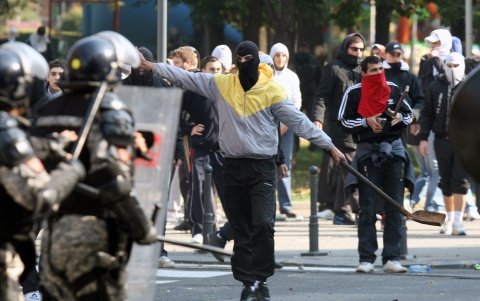 Serbia considers banning the October 02 gay pride parade in a bid to prevent outbreaks of violence as in last year's event.

Sunday's parade is due to start Sunday at 10 am in central Belgrade.

Around 5,000 police officers, including riot police, are expected to seal the parade off from the rest of the city, with plainclothes officers patrolling elsewhere.

"If police would decide, there would be no gay pride march," Serbian Interior Minister Ivica Dacic said, adding that "if the political stand prevails" to allow the march, police will protect the participants.

Dacic, who heads the ruling Socialists, argued that the gay pride march posed a major security risk for ordinary people, property and police.

"I would rather take the political responsibility for banning the event than see bloodshed," Dacic said in a TV broadcast.

A far-right extremist group has scheduled its own gathering on the same day, increasing the prospect of violence, but gay rights activists have refused to bow to pressure to cancel.

The organizers have insisted that authorities should prevent far-right violence, not back down to it.

Serbia has been advised to protect gay and other human rights if it wants to join the European Union.

Last year, the first-ever pride parade in Belgrade was marred by clashes of thousands of extremists with 5,000 police protecting the gays and their supporters, as DPA reported.

More than 100 people were arrested and dozens of police injured by flying rocks and firebombs.

Central Belgrade was ransacked and many designer stores looted in day-long fighting.

Sunday's parade is due to start Sunday at 10 am in central Belgrade.

Around 5,000 police officers, including riot police, are expected to seal the parade off from the rest of the city, with plainclothes officers patrolling elsewhere.