Bulgaria's PM Wants to Spruce Up Yet Another Defunct Airport 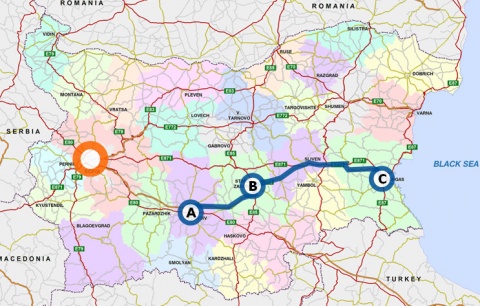 The defunct Stara Zagora Airport (B) is located between the international airports of Plovdiv (A) and Burgas (C). Sofia is marked in orange. Map from bgmaps

Bulgarian Prime Minister Boyko Borisov has demanded actions from his ministers with respect to the Stara Zagora Airport, after he passed by and saw that it looks as if it has been "bombed."

According to the transcript of Wednesday's meeting of the Bulgarian government, which was released Friday, Borisov ordered the Cabinet to figure out a way to make use of the airport near the southern city of Stara Zagora.

"I passed by the airport in Stara Zagora the other day. Whose is it? Does it belong to the military or to the Transport Ministry? The entire airport has been looted, and is covered in weeds. It doesn't even look like an airport," Borisov told his ministers.

"It is looks as if it, and not Yugoslavia, suffered aerial bombardment," the PM summed up the situation.

In response to his question, Transport Minister Ivaylo Moskovski explained that three of the buildings belong to the Transport Ministry, while the runway and the entire plot are owned by the Defense Ministry; at the same time, the airport tower is property of the Bulgarian Air Traffic Service Authority.

"That's what's going on over there. Some sort of restructuring was started in 2008 but was terminated," Moskovski said.

"Once you've checked it out, prepare for our next meeting. I want to see just one owner who I can hold accountable for the airport... So I want you to come up with an idea for the next meeting: should the airport be offered on concession, as a civilian or a freight airport, does the municipality want to manage it or do you want to manage it, etc. This is just wrong - in the very least, these are hundreds of decares of fertile land and total lack of responsibility," Borisov told the Cabinet.

Borisov's new focus on the airport in Stara Zagora, which is the sixth largest city in Bulgaria, comes amidst what it seems like a campaign to revive defunct airports around the country.

The government has already decided in favor of the reconstruction of the military airport in the Black Sea resort of Balchik into a civilian airport that needs to be completed by the spring of 2012 and is to be managed by Sofia International Airport.

The government has also started a tender to find concessionaires for Gorna Oryahovitsa Airport, Ruse Airport (aka Straklevo Airport), and the cargo terminal of Plovdiv Airport, while local and regional authorities have started a similar procedure with respect to Vidin Airport. Sofia International Airport itself is to be offered on concession.

The concession tenders for the defunct airports do not appear to have generated much investor interest for the time being but nonetheless viewed as having major development potential for entire swaths of Bulgaria.