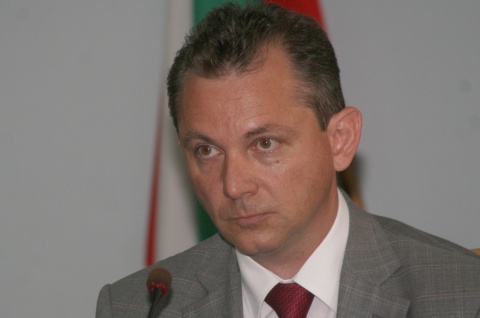 Deputy Interior Minister Dimitar Georgiev has insisted that the notorious Roma clan of Tsar Kiro is not among the sponsors of the Interior Ministry. Photo by BGNES

"I have no information about donations made by Kiril Rashkov or his associates", Georgiev stated.

Kiril Rashkov, a notorious self-proclaimed Roma tsar, whose clan's impunity triggered unprecedented protests across the country over the last few days, will be officially charged with tax evasion, prosecutors have said.

The initiative of the MP from the ethnic Turkish Movement for Rights and Freedoms, DPS, party got 17 votes in favor, 59 votes against and 13 abstainees.

Biserov reminded the scandal in early August which revealed that the Interior had received over BGN 15.5 M in donations for the first six months of the year.

He aslo drew attention to the fact that the Interior was the ministry receiving the biggest subsidy and echoed the criticism leveled by the European Commission about the donations underminding the independence of the institution.

As of September 1, the Bulgarian Interior Ministry can no longer receive donations from private individuals and private companies.

The order of Interior Minister, Tsvetan Tsvetanov, signed on August 15th, however, has some exceptions – municipalities, State institutions and companies, international organizations and foreign countries can still make donations.

In July, The European Commission condemned the corrupt donation practice in its report on Bulgaria under the cooperation and verification mechanism, causing Prime Minister Borisov to pledge that the occurrence would be eradicated. Tsvetanov, however, specified that donations would be phased out gradually, rather than rooted out at once.

In the beginning of August, the European Commission Spokesperson Mark Gray, once again, condemned the practice of Bulgaria's Interior Ministry of accepting donations.

It was reported meanwhile that the Interior Ministry was set to file a Court claim against traffic police officer, Konstantin Ivanov, who revealed the umbrella policy of the institution towards traffic violations committed by its donors. Ivanov was recently forced to resign from his job with the Sofia Police Directorate.

In the aftermath of Tsvetanov's order, the Bulgarian Dnevnik daily reported that all mayors they were able to talk to declared full readiness to donate, but had no idea where the money would come from.