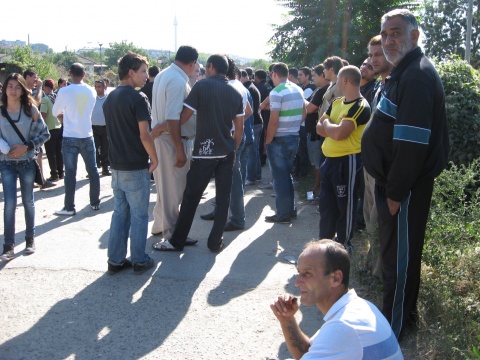 Some 100 Roma citizens gathered in the Northern city of Ruse Wednesday. BGNES

Bulgarian Roma are on high alert across the country in the aftermath of the protests that recently loomed against them.

Over 300 people have gathered in Plovdiv's Stolipinovo, the largest Roma-inhabited quarter in Bulgaria, after a local Roma man died in the early hours of Wednesday. Police authorities say the man perished in a car accident, but the Roma suspect foul play.

The situation in Stolipinovo is considered normal, but tensions may escalate, Darik radio has reported.

Some 100 Roma citizens gathered in the Northern city of Ruse, the BGNES news agency informs. After several of their houses were reportedly attacked late on Tuesday, they have decided to create "emergency crews", BGNES says.

The recent death of Bulgarian youngster Angel Petrov, who was allegedly deliberately run over by a mini-bus driven by a relative of notorious Roma crime boss Kiril Rashkov aka Tsar Kiro, led to massive protests of the ethnic Bulgarians in the southern village of Katunitsa. They culminated Saturday night into the burning of Rashkov's properties by football hooligans from Plovdiv, which is near to Katunitsa.

On Wednesday, it was announced that Rashkov has been detained by the police.

Since the protests started, it has been reported that Roma population across the country awaited attacks, armed with shovels, axes, sticks, and guns at some spots.